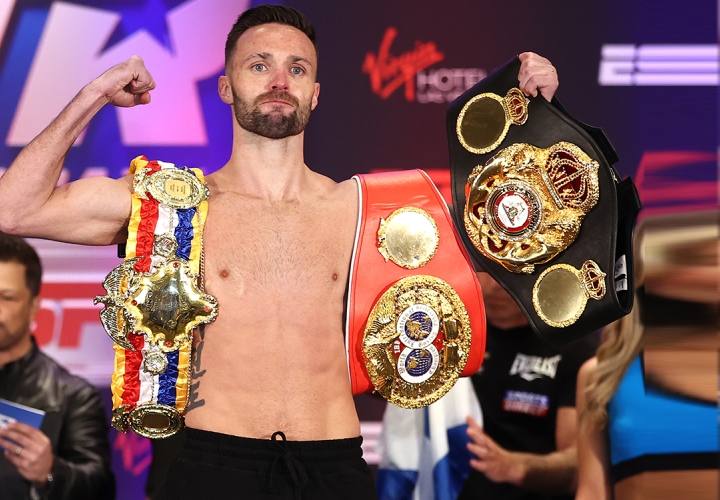 Undisputed junior welterweight world champion Josh Taylor’s title defense against top contender Jack Catterall — originally scheduled for Dec. 18 at The OVO Hydro in Glasgow, Scotland — has been postponed to Saturday, Feb. 26 at the same venue due to a knee injury Taylor suffered in training.

Ticket and undercard information will be announced at a later date. The bout will be televised live in the UK on Sky Sports and streaming exclusively on ESPN+ in the U.S.

“I’m gutted I won’t be able to defend my title on December 18 as originally planned, but I wanted to make sure I was 100 percent healthy to give my incredible fans the show they deserve,” stated Taylor. “This homecoming has been a long time in the making, and it will be worth the wait. I will see everyone on February 26.”

Scotland’s Taylor (18-0, 13KOs) will make the fourth defense of at least one junior welterweight title having held the IBF belt since May 2019. He has since added the other three belts to his collection in the two biggest wins of his career.

Taylor defended the IBF title while claiming the WBA belt in a thrilling 12-round, majority decision win over Regis Prograis to win the World Boxing Super Series junior welterweight tournament in October 2019.  The win was followed by a first-round blowout of Apinun Khongsong in a mandatory title defense last September, followed by a 12-round decision victory over unbeaten Jose Ramirez this past May 22 to win the WBC/WBO titles while defending the IBF/WBA belts.

The fight with Ramirez was able to happen thanks to England’s Catterall (26-0, 13KOs) agreeing to put his due mandatory title shot on hold with the promise of getting to face the winner.

Taylor held up his end of the bargain, agreeing to terms with the Brit for a planned December homecoming. It will have to wait another two months, though merely requiring a little more patience for a willing challenger.

“Everything happens for a reason! I am gutted not just for me but for everyone who had planned to go,” Catterall said. “I will remain professional and continue working for the new date. 2022, I will be world champion. Obstacles like this are nothing new for me. I will turn the frustration into positive energy.”