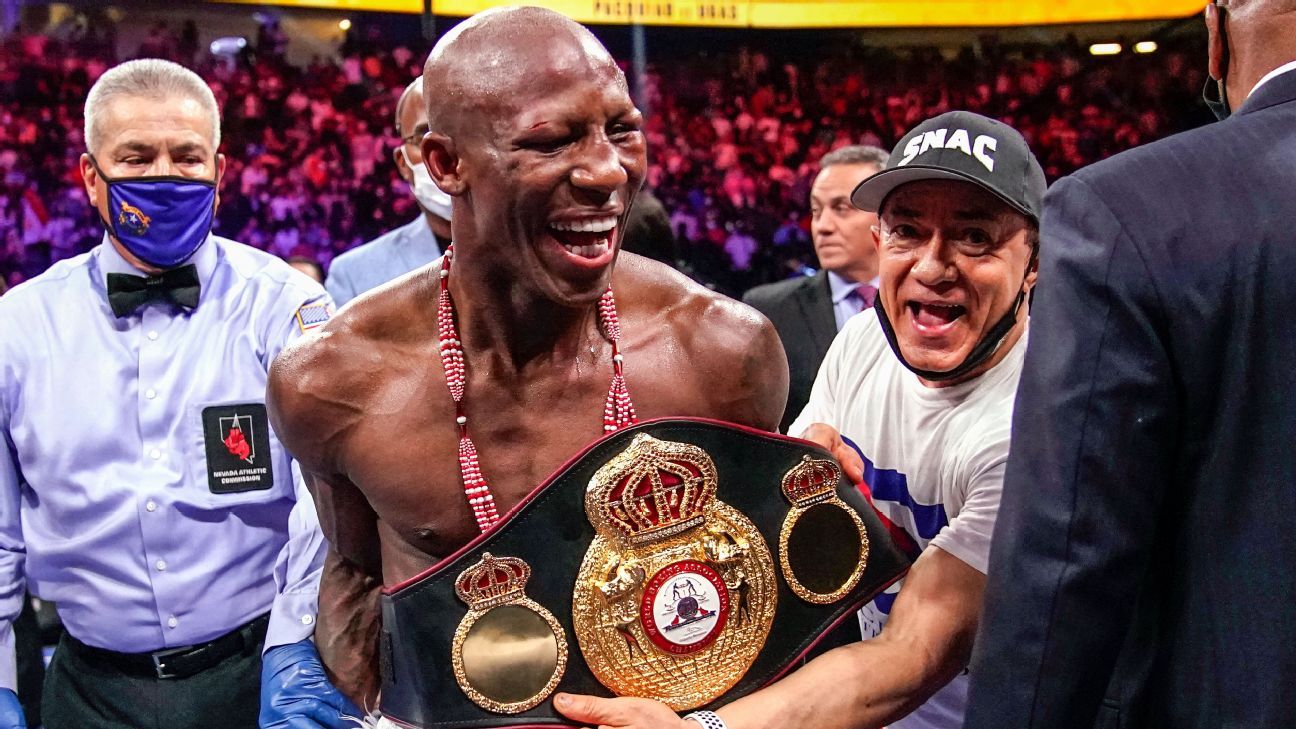 The WBA on Wednesday, in a ruling obtained by ESPN, upheld its decision mandating Yordenis Ugas to immediately defend his welterweight title against Eimantas Stanionis.

Ugas (27-4, 12 KOs) petitioned the WBA for a special permit to unify his title against two-belt champion Errol Spence Jr., but president Gilberto Mendoza ruled that the sides have 30 days to finalize a deal for an Ugas-Stanionis bout before a purse bid is ordered.

PBC officials sent a letter from Spence’s doctor stating that he’ll be cleared to fully resume training on Nov. 1, sources said. Spence was scheduled to fight Manny Pacquaio in August but withdrew from the bout after he suffered a detached retina. Ugas stepped in on 11 days notice and scored an upset victory to claim the title.

The target date for Spence-Ugas was Feb. 22, according to the ruling. However, Mendoza had no confidence Spence would actually be ready to fight then. The WBA also would have required Spence to be approved by an independent doctor if it had approved the special request, Mendoza said.

“I think it’s pretty obvious that the WBA is out for their interests only,” Ugas told ESPN on Wednesday through his manager Luis DeCubas Jr., who translated. “He’s trying to stop one of the best fights of next year by having me fight an unknown fighter with [13] fights.”

Ugas described Mendoza’s past actions as “suspicious,” referring to his appointment of judge Gloria Martinez Rizzo, whom the WBA suspended indefinitely after her highly controversial scorecard in the Mykal Fox-Gabriel Maestre interim welterweight title fight and the uncovering of racist tweets on an account belonging to her.

“He’s shown tendencies to not do things correctly to now all of a sudden be the pope,” Ugas said. “It’s very suspicious to me. Me and my legal team are going to dig into this scenario because it doesn’t seem right, and there’s definitely damages to my career that have been done by this decision that has no merit.”

Following the scoring fiasco in the Maestre-Mykal Fox fight in August, a bout Fox appeared to clearly win, Mendoza faced heavy pressure to consolidate the crowded title picture; the WBA has multiple champions in many divisions.

Part of that plan called for a four-man box-off in the 147-pound division. Jamal James, ESPN’s No. 10 welterweight, will fight Radzhab Butaev in an Oct. 30 Showtime main event. The other half of the equation is a fight between Ugas and Stanionis. The winners would then face off.

If Ugas, 35, wants to immediately proceed with the fight against Spence, he’ll need to first relinquish his title. PBC planned to match Spence and Ugas last summer before Pacquiao surprisingly agreed to fight Spence. When Spence was injured, Ugas scored the opportunity of a lifetime and cashed in with a unanimous decision victory over the living legend, earning ESPN’s No. 3 ranking at welterweight.

While Stanionis (13-0, 9 KOs) might not have a large profile yet, he has impressed in his short run en route to the No. 9 spot in ESPN’s rankings. The 27-year-old represented Lithuania at the 2016 Olympics and was fast-tracked in the pros. Trained by Freddie Roach, he has shown incredible strength for the 147-pound division to go along with a crowd-pleasing pressure style.

In April, he scored a convincing victory over durable veteran Thomas Dulorme and looked like a future champion. That chance to make his title dreams a reality might have to come against someone other than Ugas.

“I feel like fighters should start changing their stances on giving the WBA 3% of their purses for sanctioning fees,” Ugas said. “That’s the same percentage they pay team members. I flew to Columbia to sit down with [Mendoza]. He won’t take my calls, he won’t see me. Every single person who has a WBA title should take notice. If my name was Gabriel Maestre or Jorge Linares or any other Venezuelan fighter he’s affiliated with, I wonder if he would still leave me stranded.”

Mendoza said he never agreed to meet with Ugas and that it would be unethical to do so ahead of a pending ruling.

‘You only fight him because you have to’: Why nobody wants to get into the ring with light heavyweight champion Artur Beterbiev
De La Hoya Aims To Sign Crawford: Let Us Present You With Schedule Of Fights Leading To Spence
De La Hoya Eager To Sign Edgar Berlanga To Golden Boy: ‘Come Talk To Us, Or We’ll Fly To You’
AWKWARD! Artur Beterbiev BITES BACK at question ‘YOU WANT TO BE ANGRY WITH US?!’ | #shorts
Frank Warren: Beterbiev Is A Monster, But Our Guy (Yarde) Is, Too; If He Catches You, You Go