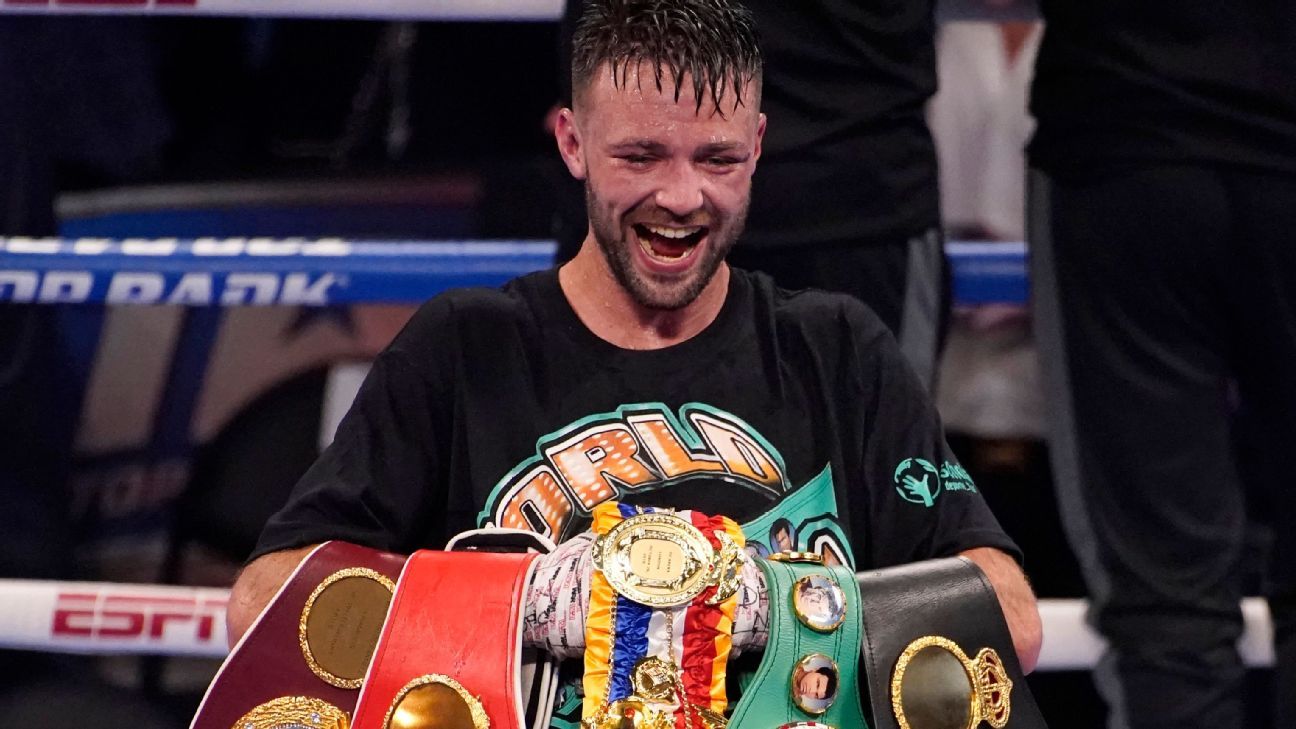 Josh Taylor’s undisputed 140-pound championship fight vs. Jack Catterall has been postponed from Dec. 18 to Feb. 26 after the champion suffered a knee injury, Top Rank announced on Thursday.

The title defense, Taylor’s first since capturing all four belts with a decision victory over Jose Ramirez in May, will be a homecoming at The OVO Hydro in Glasgow, Scotland, on ESPN+.

“I’m gutted I won’t be able to defend my title on Dec. 18 as originally planned, but I wanted to make sure I was 100% healthy to give my incredible fans the show they deserve,” Taylor (18-0, 13 KOs) said in a prepared statement. “This homecoming has been a long time in the making, and it will be worth the wait.”

The 30-year-old scored two knockdowns of Ramirez in Las Vegas en route to a unanimous-decision victory; he picked up two more junior welterweight titles in the process and is rated No. 8 pound-for-pound by ESPN.

Catterall (26-0, 13 KOs) has waited a long time for his first title shot and will now need to display even more patience. He has been the WBO’s mandatory challenger since 2019 and stepped aside to allow Taylor-Ramirez to proceed with the promise that he would fight the winner next.

“Everything happens for a reason,” Catterall said. “I am gutted, not just for me but for everyone who had planned to go. I will remain professional and continue working for the new date. [In] 2022, I will be world champion. Obstacles like this are nothing new for me. I will turn the frustration into positive energy.”

The 28-year-old Englishman is a southpaw, like Taylor, but is largely untested. His best win came in 2018, a decision victory over Ohara Davies.

All but four of Taylor’s fights have been in the U.K., but this will be his first bout in Scotland since a May 2019 title-winning effort vs. Ivan Baranchyk in the World Boxing Super Series. Taylor’s sterling run at 140 pounds also includes wins over former champions Regis Prograis and Viktor Postol.

Trout vs De Angel FULL FIGHT: February 17, 2018 | PBC on FOX
Why we might have to wait until 2024 to see Artur Beterbiev vs. Dmitry Bivol in a must-see matchup
ICE COLD! Artur Beterbiev vs Anthony Yarde • FACE OFF after final press conference | BT Sport Boxing
Yesterday’s Heroes: Alan Minter at the Olympics
W. Klitschko objects to Olympic path for Russians