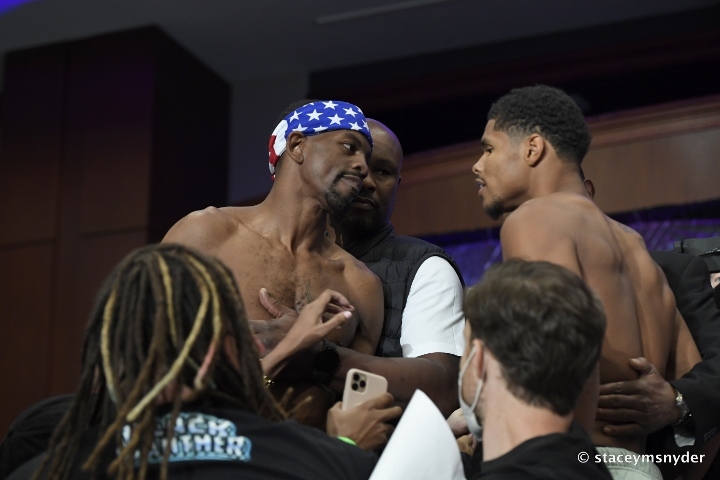 Shakur Stevenson is a much heavier favorite than most challengers in world championship prizefights.

Caesars Sportsbook has established the unbeaten southpaw as a 10-1 favorite over Jamel Herring in advance of their 130-pound championship match Saturday night. Herring will make the fourth defense of his WBO junior lightweight title versus Stevenson, yet it is as if bettors and handicappers have determined it’s a foregone conclusion that the younger, slicker Stevenson will become a champion in a second division at State Farm Arena in Atlanta.

It isn’t uncommon territory for Herring, however, as he has grown accustomed to getting overlooked.

“Look at all my big fights,” Herring told BoxingScene.com. “I was an underdog against Ito, Frampton, this one. So, it doesn’t mean much to me.”

That’s not entirely true, of course. Herring has successfully used such slights as motivation throughout the back end of a career he turned around by moving down from 135 pounds to 130 and by joining Terence Crawford’s training team.

In his fourth fight with them in his corner, Herring upset Japan’s Masayuki Ito by unanimous decision in a 12-round bout to win the WBO 130-pound crown in May 2019. Ito, then 25-1-1, was a 2-1 favorite entering their title fight in Kissimmee, Florida.

Herring opened as a slight favorite over Frampton, but the odds on their fight were essentially even when the opening bell rang April 3 at Caesars Bluewaters Dubai. Herring clearly was underestimated before that bout because he floored Frampton twice and stopped him in the sixth round of what amounted to a dominant performance for the 2012 U.S. Olympian from Coram, New York.

The odds on this fight with the left-handed Stevenson – a Newark, New Jersey, native who is 11 years younger than him – are the widest Herring has faced by a significant margin in nearly nine years as a pro.

“That just gives me added motivation, in terms of winning big,” Herring said, “because I look at it like this – if it’s a fight where people expect you to go out and dominate, you don’t really get much out of it in victory. So, for me, whenever I’m underestimated and I win big, it means the world.”

Herring-Stevenson will headline a three-bout broadcast by ESPN that is set to start at 10:30 p.m. EDT.

Sources: Paths being explored for Benn-Eubank
Deontay Wilder is back in the gym, and he’s hungry for vengeance.
Benn insists he’s a clean fighter as Eubank showdown hangs in limbo
“Born Rivals” Eubank Jr. and Benn Travelled Parallel Path To Saturday’s Showdown
Chris Eubank Jnr says there was no phone call with Conor Benn, but does expect their fight to still go ahead