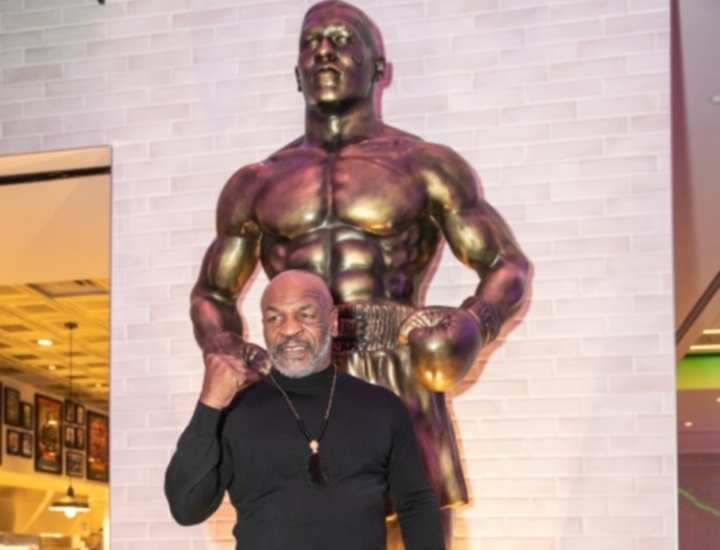 Mike Tyson helped maintain Las Vegas as the west coast mecca for boxing throughout the 1990s.

Now, a new statue embodying Iron Mike has made its way to the recently built Resorts World on The Strip. The 10-foot-tall erection was commissioned by Mulberry Street Pizzeria owner and founder Richie Palmer.

“Well you know, I’m from New York and Mulberry Pizzeria’s legendary there and I lived in Beverly Hills and it was legendary there,” Tyson said during the statue unveiling. “I lived around the corner from it. I was here in [Las] Vegas and [Richie] honored me with the statue and I’m really humbled and thank you, Richie. I knew Richie ever since my teenage years in New York City and we have always been close and I’m a little overwhelmed. I’m pretty humbled right now.”

A press release from the pizzeria stated Palmer is an avid boxing fan and felt that Tyson represents a prominent part of Las Vegas.

Tyson’s two biggest fights in Las Vegas were against Evander Holyfield. After biting Holyfield in the ear and being fined $3 million for the offense in 1997, Tyson fought two more times in Sin City. But his Nevada boxing license was revoked, and he was forced to fight his last eight pro bouts outside of Nevada.

Tyson is the youngest heavyweight champion in boxing history and finished his career with 50 wins (44 via KO) and 6 losses. He last was in the ring in 2020 when he participated in a spirited exhibition match against Roy Jones Jr.