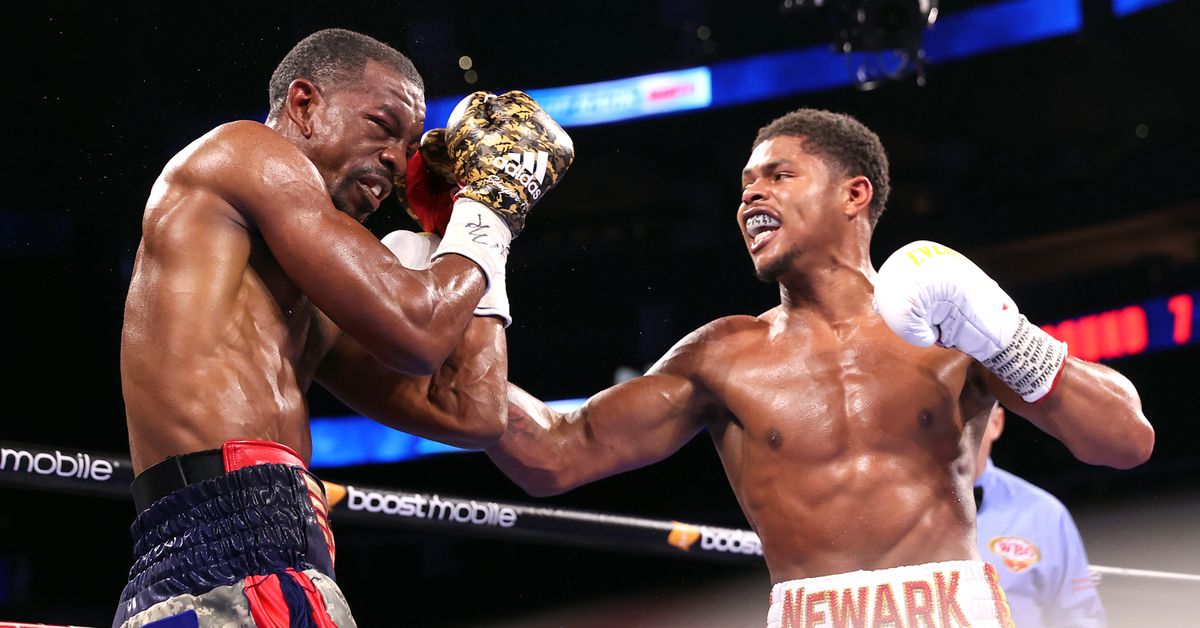 The 24-year-old Stevenson (17-0, 9 KO) largely dominated this one, with his speed, skill, and just overall level proving too much for the veteran Herring (23-3, 11 KO), who saw his title reign end just shy of two-and-a-half years.

Stevenson was clearly too fast for the 36-year-old Herring from the get-go, but Herring did try his best to figure a way into the fight. He could never quite get it going, though he did his best to march forward and rough Stevenson up on the inside. The problem then became that Stevenson could more than hold his own on the inside.

Herring, who had swelling for much of the fight, was cut in the ninth round. After the doctor took a quick look at it in the 10th, Stevenson unloaded with some clean shots, and referee Mark Nelson decided he’d seen enough.

“I feel like Jamel Herring is a great fighter. He’s tough. He’s real tough, he’s got great boxing skills, he’s got great power. I was just the better man tonight,” Stevenson told ESPN’s Bernardo Osuna. “Now that we’re not fighting, I love Jamel Herring, he’s definitely my friend. I don’t got no problem with Jamel. Tell his wife I’m sorry, I don’t want no trouble with you! She’s tough.”

Stevenson said that some media criticism — particularly from ESPN’s Tim Bradley — spurred him on to giving a more entertaining performance tonight.

“I want to thank Tim Bradley. Tim Bradley was criticizing me, calling me boring,” he said. “So I wanted a fun fight. I wanted to perform, show my skills; show my boxing skills, my defense, my power. I showed everything tonight.”

And Stevenson has a predictable next target, a guy he’s been trying to fight since they were both featherweights: WBC titleholder Oscar Valdez.

“There’s only one fight left. It’s the biggest fight in the division,” Stevenson said. “Oscar can’t keep ducking, it’s time for him to fight. It’s me versus Oscar Valdez, there’s nothing else to look forward to, we need to unify the 130 lb division. Let’s get it!”

“He’s sharp. He’s sharp and slick. His hand-eye coordination is very good,” Herring said of Stevenson. “No excuses, he was just the better man tonight. I started slow, but after a while, I can’t do the chess match with him, so I had to bite down and show that grit and push forward.”

“He’s younger, faster — he was sharp. He was sharp tonight,” Herring trainer Brian McIntyre said. “I take my hat off to the whole team over there. I thought he was going to move like other fights, but they had a good game plan. He executed, he got the win.”

“I don’t know (what’s next),” Herring said, and hinted at least a bit that he might possibly call it a career. “I’ll wait and see what happens next.” He urged Stevenson to “take over” at 130 and “keep being great.”

“He’s not a bad dude. He’s a good kid, and that’s why I never took it personal,” Herring added. “I just hope Shakur can continue with what he wants to do, get the bigger fights, and I’ll enjoy being a fan and watching him.”

Oleksandr Usyk To Tyson Fury: “I’m Ready To Box You Even Without Any Prize Money!”
Amir Khan & Kell Brook SQUASH BEEF after CLASSIC RIVAL fight
Anthony Yarde: I Wouldn’t Know What I’m Made of Without Losses
Sources: Joshua-Franklin close for April 1 at O2
Bohachuk vs Gallimore: Live updates and results NOW!