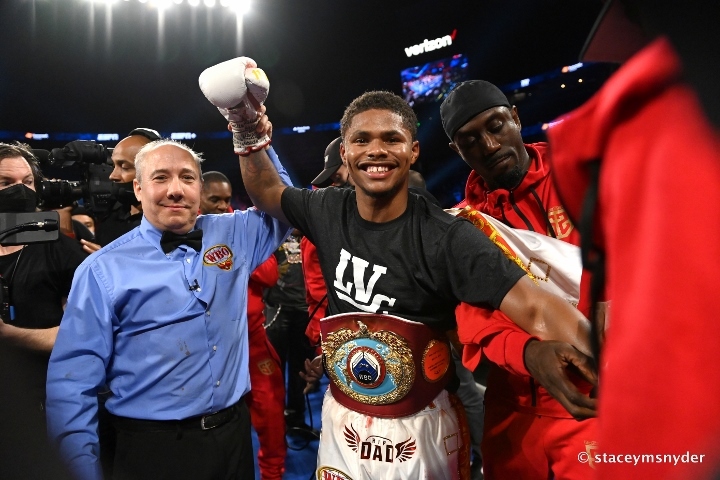 In every sport, the athletes competing against one another are not only not necessarily bitter rivals, but they might be training partners as well. Watch the end of any NFL game, for example, and you’ll see players from opposing teams greet one another, generally their pals that they work out with in the offseason before heading to camp with their respective squads. Players have old college teammates, former teammates from previous stops in the league or friends made along the way, and the fidelity to their team in terms of training pauses when the season ends. It’s something that’s understood—players can help one another work out, even improve their skills, but the playbook, their strategy remains a secret.

In boxing however, that dynamic can get a little more awkward, and there is no better example than Saturday night’s 130-pound title bout between Shakur Stevenson and Jamel Herring.

Stevenson and Herring run in the same circle, a camp and training group underneath the Terence Crawford umbrella, so to speak. Herring is trained by Brian “BoMac” McIntyre, also Crawford’s trainer, who runs the gym in Colorado Springs Stevenson typically trains at. Crawford has been a mentor to Stevenson since 2016, and the group is generally all training together at the same time.

For this bout, they had to split up, with Herring remaining in Colorado Springs and Stevenson setting up shop with his grandfather Wali Moses and Kay Koroma in Las Vegas.

With both Herring and Stevenson occupying the same weight class, fighting one another would have been tough to avoid. As much as boxers have teams and camps, they’re still individuals, independent contractors all vying for the same goal.

Nonetheless, it wasn’t a matchup Crawford wanted to see happen, lest there be dissention within the crew. Crawford made the decision to not participate in Herring’s camp, a rare instance in which the two did not spar in preparation for a bout, so as to stay neutral.

“He hates it. He doesn’t like the idea of us fighting each other. He has pulled me to the side a few times in camp and expressed his opinion, and just wished that we both could’ve went different routes,” Herring told Boxing Scene’s Keith Idec last week.

But a curious thing happened during the buildup to the fight. Stevenson opted to downplay his relationship with Herring altogether. By all accounts, the two had been friends, but Stevenson rejected that altogether, even insisting at one point that he “didn’t know Herring,” which was patently untrue, even if you believed there to be some validity in the overstatement of their relationship.

Stevenson took it a step further, adopting what was described by ESPN commentator Joe Tessitore as a “heel” role leading up to the fight. Herring, whose heroic military background, tragic family history and kind demeanor have made him one of the sport’s most well-liked figures provided the perfect foil. Much of the pre-fight chatter followed the pattern of Stevenson saying something inflammatory, protesting the portrayal of his relationship with Herring, and Herring responding politely suggesting Stevenson was lying, but that the talk was “just business.” Stevenson did always keep one foot in reality, declaring that Herring’s coaching staff was “the best thing he’s bringing into the ring–not his team’s familiarity with me, his team in general,” a tacit nod to the closeness of their circle.

In the midst of his heel turn, so to speak, Stevenson also found himself at odds with ESPN commentator Timothy Bradley, who criticized Stevenson’s “boring” performance in his bout against Jeremia Nakathila and his ability to sell tickets.

Suddenly, the story became the brash youngster trying to break from the pack, show the oldtimers he knew best and beat up the man who proceeded him on the Olympic team in 2012, while the old veteran Herring looked to teach Stevenson a lesson.

In practice however, Herring wasn’t able to trouble Stevenson much in the ring. Perhaps fueled by the loud criticism of his performance against Nakathila from Bradley and others, Stevenson opted to stand right in front of Herring and turned in the most aggressive offensive performance of his career, battering Herring for ten rounds before the bout was stopped.

Only one judge was able to find one round for Herring, who found the closest thing to success in the fifth round when he was able to land 12 punches on Stevenson after finding his way to the inside at last. The only upper hand Herring had on Stevenson on this night was in the ring walk category: Herring entered with hip hop legend Jadakiss who performed every word of We Gonna Make It, while Stevenson entered with Quavo, who half-heartedly rapped along to his group Migos’ hit Straightenin.

Stevenson was even able to trick McIntyre, who admitted after the fight that he “didn’t expect (Stevenson) to stand his ground,” expecting him to concede space and box off his back foot. Instead, Stevenson mostly met Herring in the center of the ring, outlanding Herring 164-87, 99 of which were determined to be power punches by CompuBox. What was perhaps more impressive than his more spiteful offensive approach was his ability to turn in the prodigious defensive metrics he’s become known for all while remaining in the pocket. Stevenson held Herring to single digit connections in six of the ten rounds that were started in the fight.

The way the fight unfolded, it became evident that the only way for Herring to beat Stevenson would have been if Stevenson fought passively and allowed himself to get outworked. Because although McIntyre said he expected Stevenson to back up more often, the end goal for Herring no doubt was to close the distance as often as possible. It just so happened that Stevenson willingly met him on his own terms, and was able to hit and not get hit at nearly the same rate as he had in past fights when he’d played it more cautiously.

As the fight was waved off in the tenth with Herring’s eye gushing blood and with little evidence to suggest Herring would be able to win the fight, Stevenson immediately poked his head through the ropes to talk to Timothy Bradley.

“I want to thank Tim Bradley. He was criticizing me, calling me boring, so I wanted a fun fight,” Stevenson said afterwards.

Not long after, Stevenson pulled back the curtain on the tale and the character he’d taken on during the buildup to the fight.

“It was no friends because we were fighting. But now that we’re not fighting, I love Jamel Herring,” he said. “He’s definitely my friend. I got no problem with Jamel and tell his wife (Jennifer) I’m sorry (for the harsh words). I don’t want no trouble with you! She’s tough!”

Top Rank posted footage of Stevenson and Herring embracing in the locker room after the fight, both smiling and laughing as they shook hands and hugged. Jennifer Herring stood on the wall behind her husband, chewing gum and side-eyeing Stevenson.

“Congratulations to (Stevenson) thank you for apologizing but don’t try that mess again!  Don’t be a bad boy to sell a fight! Your talent will sell for you! Make me proud and stay humble! Hold on tight to that belt love,” she said, adding in a subsequent tweet, “I want (Stevenson) to hold it down like a true king with style and class as I know he can sell a fight in better fashion. I accepted his apology and will support his journey on the 130 throne.”

The night will be categorized as a coming out party for Stevenson, who scored the biggest win of his career with the most impressive performance of his career. But the night also felt like one communal teaching moment for a fighter many believe will be at the forefront of the sport for years to come.

His older friend and training partner Herring in one way or another brought out a side of Shakur we hadn’t seen. His friend’s wife offered him life advice, seeing through his juvenile mistakes.

Timothy Bradley was on commentary, alongside Shakur’s former manager and mentor Andre Ward, the sage former fighters helping motivate his change in approach. His other mentor, Terence Crawford, sat ringside overseeing it all.

In boxing, sometimes teammates fight. But a team is still a team, and friends are still friends.

Corey Erdman is a boxing writer and commentator based in Toronto, ON, Canada. Follow him on Twitter @corey_erdman