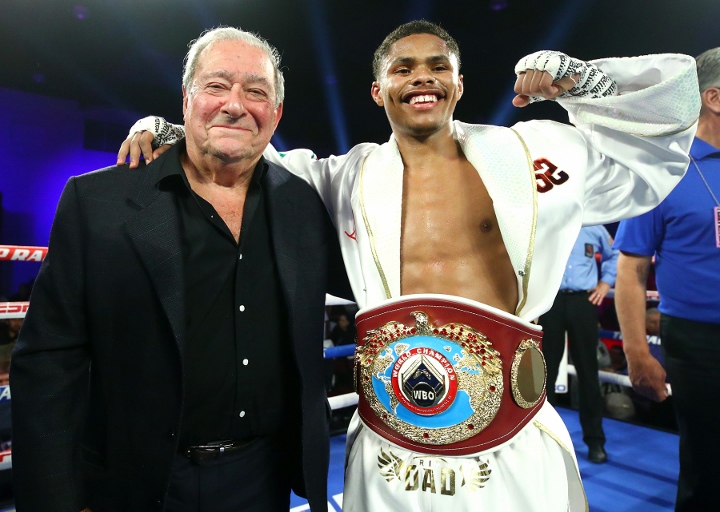 ATLANTA – Shakur Stevenson dismissed the suggestion of an Oscar Valdez-Emanuel Navarrete fight in the immediate aftermath of his highly impressive performance against Jamel Herring.

Stevenson hopes promoter Bob Arum doesn’t place Valdez in the Top Rank protection program now that the unbeaten southpaw has made their fight more intriguing for Valdez by winning the WBO junior lightweight title from Herring, whom Stevenson stopped in the 10th round Saturday night at State Farm Arena. The 24-year-old Stevenson (17-0, 9 KOs) has been calling out Mexico’s Valdez since they were featherweights, and the former WBO 126-pound champion cannot see any reason why a 130-pound title unification fight versus Valdez shouldn’t be next for both boxers.

Arum has informed BoxingScene.com and other outlets, however, that he is interested in putting together an all-Mexican showdown between Valdez (30-0, 23 KOs), the WBC super featherweight champion, and Navarrete (35-1, 29 KOs), who now owns the WBO featherweight title. Top Rank promotes Navarrete, Stevenson and Valdez, which makes either of those bouts relatively easy to make.

“There is no other fight,” Stevenson said during his post-fight press conference. “I feel like that’s a lame thing to do. I feel like Navarrete is a 126-pounder. He only got the 126-pound belt. I been calling for Valdez. I would feel like Bob is protecting Valdez if he go do that, so I doubt he’ll do that.”

Stevenson believes pressure from Valdez’s passionate Mexican fan base will make his rival feel obligated to face him. The 30-year-old Valdez also stated after his subpar performance in a narrow points victory over Brazil’s Robson Conceicao (16-1, 8 KOs) on September 10 that he is more than willing to finally face Stevenson.

“I feel like he ain’t gonna have no choice at the end of the day,” Stevenson said. “He a Mexican and them Mexican fans is not gonna allow him to keep duckin’ and dodgin’. So, I got a belt now, I put on a great performance with a top-level champion and I don’t think there’s no way out now.”

Only one boxer besides Stevenson and Valdez owns a recognized 130-pound championship.

Beyond boxing Valdez, Stevenson wants to become the fully unified 130-pound champion before he considers moving up to the lightweight division, within which there are higher-profile fights against his contemporaries.

“Oh yeah, I need every title at 130,” Stevenson said. “At the end of the day, I need to be undisputed. I saw Teofimo do it and I need it to happen for me, too.”

Benavidez vs Plant Is ON for March 25 on SHOWTIME PPV in Las Vegas
Liam Smith’s Trainer: Truly Believe Chris Underestimated Him; He’s Just A Fantastic Fighter
Oleksandr Usyk To Tyson Fury: “I’m Ready To Box You Even Without Any Prize Money!”
De La Hoya Aims To Sign Crawford: Let Us Present You With Schedule Of Fights Leading To Spence
Bob Arum: Location For Tyson Fury-Oleksandr Usyk Fight To Be Announced Next Week