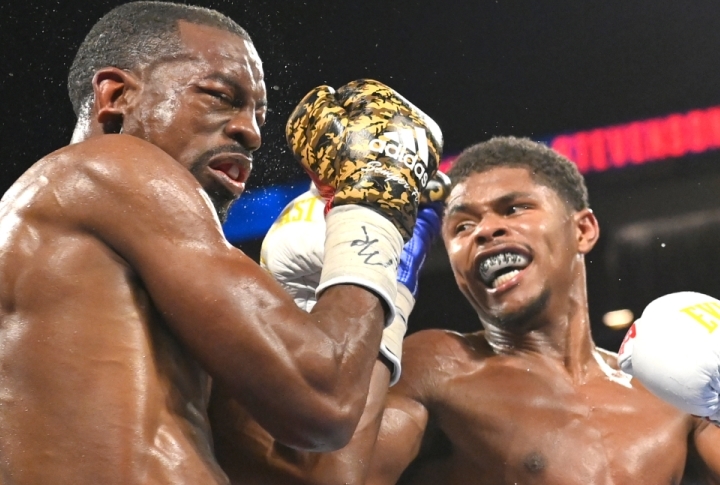 Every now and then, you see it.

You may not even be able to specifically define it, but it’s there.

Such is the case with Shakur Stevenson.

Maybe you notice his footwork. Perhaps you focus on his hand speed.

Or it could be the way he carries himself before a significant fight.

But whether it’s one thing specifically or the entire package combined, only a die-hard contrarian would suggest at this point that the guy’s got anything less than superstar potential.

Such was the comprehensive nature of his beating of Jamel Herring last weekend.

Make no mistake, Herring was far from pound-for-pound material.

He’d been beaten twice during his formative years, and even during a seven-fight pre-Stevenson win streak hadn’t exactly handled a who’s who of champs and top contenders.

In fact, a faded Carl Frampton was the biggest of his big resume names.

Still, he was a legit opponent with a three-defense title reign, a big heart and a compelling back story that revealed the sort of adversity that’d make him a tough out.

When laid alongside Stevenson, though, it wasn’t close to an equal measurement.

Showing the poise of an operator far older than 24 and far more experienced than one previous title fight, the New Jerseyan was simply better than his decade-older foe in every facet of the competition.

He moved better. He punched faster. He hit harder.

And in doing so, he rose to the level of the moment.

To fans of a certain vintage, it was like watching a 24-year-old Aaron Pryor’s coming-out against 34-year-old Antonio Cervantes (KO 4) in 1980. Or to those a generation behind, perhaps Felix Trinidad, then just 20, in with 30-year-old Maurice Blocker (KO 2) in 1993.

Maybe not as devastating. But every bit as definitive.

“My mindset was, ‘I’m going in there to take the belt. I’m not going to make this close or make it what they expect it to be,’” Stevenson said. “I wanted to dominate. And I dominate all my fights, and nothing is going to change with anybody in front of me. I don’t care who it is.”

And as it turns out, I wasn’t the only one who noticed.

“I was very impressed with Shakur,” Randy Gordon, former editor-in-chief at Ring Magazine and chairman of the New York State Athletic Commission, told Boxing Scene. “Hopefully, his next fight is versus Oscar Valdez, not someone like a comebacking Leo Santa Cruz.

Indeed, as Gordon suggested, the dazzling nature of the outing immediately prompted looks toward the future and the opponents who could add layers to Stevenson’s burgeoning street cred.

Santa Cruz is a name at this point but little else, having spent the better part of his career at lighter weights and having won just once beyond 126 pounds. Considering he was last seen crumbling unconscious at the feet of Gervonta Davis, it’s hard to imagine him faring any better with this guy.

Two slots up in the Independent World Boxing Rankings is Miguel Berchelt, an equally rugged and more one-punch powerful 130-pound version of Santa Cruz, though his last appearance – falling to the floor in front of Valdez – was just as unseemly. The advantages in speed and sheer athleticism that Stevenson held against Herring would be similarly evident against Berchelt, meaning it’s a bad mix for the Mexican.

Given the paucity of options elsewhere, it appears all roads lead to Valdez.

Whether Bob Arum, whose Top Rank conglomerate promotes both fighters, believes it or not.

Because Stevenson, to his dare-to-be-great credit, does.

“There’s only one fight left,” he said.

“It’s the biggest fight at the end of the day. Oscar can’t keep ducking. It’s time for him to fight. There’s nothing else to look forward to. The 130-pound division needs to unify. Let’s get it. I want to be a superstar in the sport. I’m here to last. I take my craft very seriously. I’m disciplined.”

Ducking claim notwithstanding, Arum may be tracking Valdez toward a far-more winnable and potentially more lucrative – particularly south of the border – get-together with another of the company’s champions, reigning WBO featherweight kingpin Emanuel Navarrete.

It’s not a terrible business decision on the part of Arum, who could build the brand of either fighter with the victory and thereby make a subsequent cash-out showdown with Stevenson, presuming he’s cleared a stand-in hurdle or two in the meantime, even bigger about a year from now.

Presuming it’s Valdez, the tale of the tape is comparable.

“There is no other fight,” Stevenson said.

“I feel like that’s the main thing to do. I feel like Navarrete is a 126-pounder, and he’s got the 126-pound belt. I’ve been calling for Valdez. I feel like Bob is protecting Valdez if he isn’t going to do that.”

NOTE: Fights previewed are only those involving a sanctioning body’s full-fledged title-holder – no interim, diamond, silver, etc. Fights for WBA “world championships” are only included if no “super champion” exists in the weight class.

Lyle Fitzsimmons has covered professional boxing since 1995 and written a weekly column for Boxing Scene since 2008. He is a full voting member of the Boxing Writers Association of America. Reach him at fitzbitz@msn.com or follow him on Twitter – @fitzbitz.

De La Hoya admits to making pitch to Crawford, believes he can deliver big fights
Sources: Joshua-Franklin close for April 1 at O2
The Beltline: Just as boxers must do better, we must know not to expect perfection
Sources: Ortiz-Stanionis bout set for April 29
Sweet D Files: Is pay-per-view driving fans away from the sport?