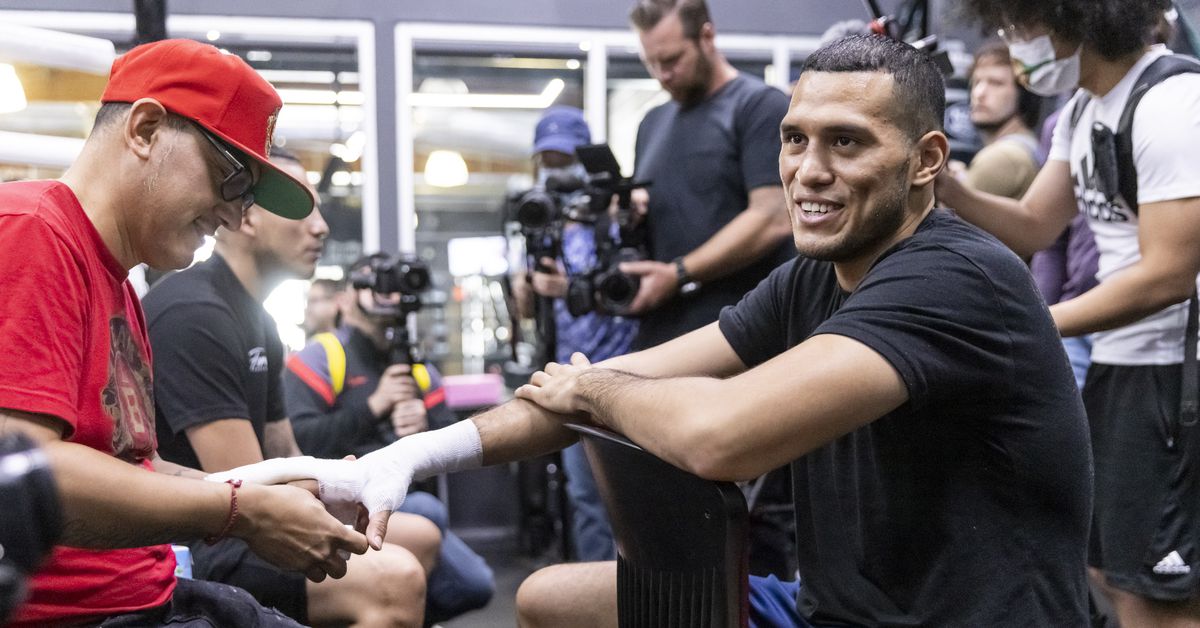 With former wold titleholder David Benavidez (24-0, 21 KOs) gearing up for a November 13 fight against hard charging Jose Uzcategui (31-4, 26 KOs), Benavidez chats it up with reporters during a media training session. Discussing his preparations for this upcoming Showtime headliner, Benavidez says he’s been taking his conditioning seriously as he looks to impress on fight night.

“Everything has been amazing in camp,” Benavidez said. “We’re sparring 12-13 rounds and running six or seven miles a day. I’ve worked very hard and I can’t wait to put on a show November 13. Uzcategui is a tough competitor and he was a former world champion, so I have to give him that respect. There are big fights on the horizon for me, so I have to prepare accordingly for Uzcategui.”

And while Uzcategui will certainly bringing his own reputation as a come-forward, volume puncher, in a similar vein to Benavidez, it’s the skill difference that Bendavidez sets him apart from his opponent.

Benavidez is also looking to thrive off the energy from fighting in front of his hometown Phoenix crowd, where he hasn’t fought since 2015, and in this outing he’ll be making his appearance at the Footprint Center.

“A lot of people in Phoenix are excited for this one. I’m excited to go back. The timing is perfect. For me, this is the biggest fight of my career. I’m ready for anything that comes my way November 13.”

Of course with a win here Benavidez is well aware that he could be in line for a huge fight. After all, many boxing experts, trainers, and the like believe he’s could be the most dangerous opponent out there for Canelo Alvarez. Benavidez hasn’t shied away from saying that he looks forward to a future opportunity against the Mexican star, but also knows all that could vanish if he doesn’t keep an eye on the task at hand.

“We’re just focused on Uzcátegui, but of course there are bigger fights for me in the future. If I win this fight, I’m in the number one spot for whoever wins between Canelo Alvarez and Caleb Plant. Facing Canelo would be a huge fight in the super middleweight division, but I have to go out there on November 13 and get this victory first.

“Right now, with the level I’m at, the fighters that I’m seeking to fight are champions and former champions. Whether it’s Canelo, Plant or Jermall Charlo, I feel like we’re all going to end up facing each other at some point.”

Benavidez continues by saying that while Canelo-Plant is good for the sport of boxing at this moment, he still feels that he’s ready for the cream of the crop and is looking to establish his own name at the top of the mountain.

“Canelo vs. Plant is a great fight for the division. It’s a fight where both guys have a lot to prove. Those kinds of fights tend to bring the best out of everybody. There’s a lot of pressure and a lot of glory on the line, so I feel like they’re going to be the best they’ve ever been. I’m going to be ready for the winner next.

“I’ve been a pro for eight years already. I just want the biggest fights out there. This is the level I’ve been working to get to for a long time, and we’re finally here at this moment. I want to fight the best of the best and prove myself. I want to show that I’m the best super middleweight in the world.

“Uzcátegui is strong and he has a will to win, but I just believe that I have the better skill set. These are the types of fighters that I need to test myself against. It’s definitely going to be a war, but I’m going to come out on top.”

Highlights and results: Saracho upsets Francis in ProBox TV’s first Wednesday night show
Barrios-Santiago, Pero-Faust set for Vargas vs Foster undercard
Panel: How much interest do you have in seeing a rematch between Liam Smith and Chris Eubank Jnr?
Green joins Jake Paul group ahead of Feb. fight
Editor’s Letter: It’s likely to be a long road back for Chris Eubank Jnr