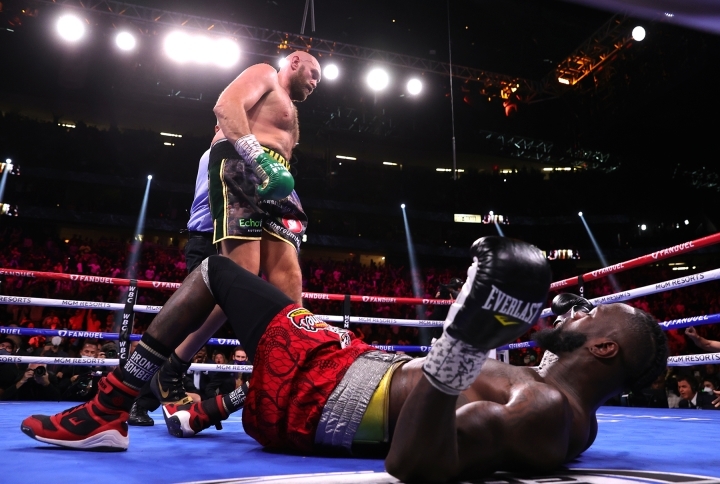 Anthony Joshua was impressed by the recent victory achieved by his countryman, Tyson Fury, who retained the WBC heavyweight title with a knockout of Deontay Wilder.

Fury overcame two knockdowns to score a knockout of Wilder in the eleventh round at T-Mobile Arena in Las Vegas.

The fight took place only two weeks since Joshua lost his IBF, IBO, WBA, WBO world titles by way of a unanimous decision at the hands of Oleksandr Usyk.

“Fury done really well for a man in his first title defense as a champion,” Joshua told IFL TV. “It shows just how tough it is being champion at the moment.

“But he did very well to come through the storm, but [Fury’s trainer] SugarHill [Steward] deserves a round of applause in the corner. That helped him a lot having that trust and wisdom in his corner, a great corner set-up.

“Well done to him WBC champion of the world and two-time champion it is lovely for his wife and family particularly his old man [John Fury] who deserves it and is his biggest f—— supporter. So it is lovely to see him making his family proud same as I make my family proud so well done to them. And Sugar Hill Steward and Andy Lee have done a superb job with Tyson.”

As far as his take on Wilder, the British star believes the twice-beaten boxer could learn from this defeat and use the experiences to become a better fighter.

“I would of iced half the motherf—— he has in his fights,” Joshua said. “And then you come up against one of two good fighters and it shows how difficult it is at the top level.

“And he is trying to learn now because he has realized ’sh!t’ Fury is a decent fighter’ and if he uses his ability to learn as fuel he could go far in the next three or four years.”