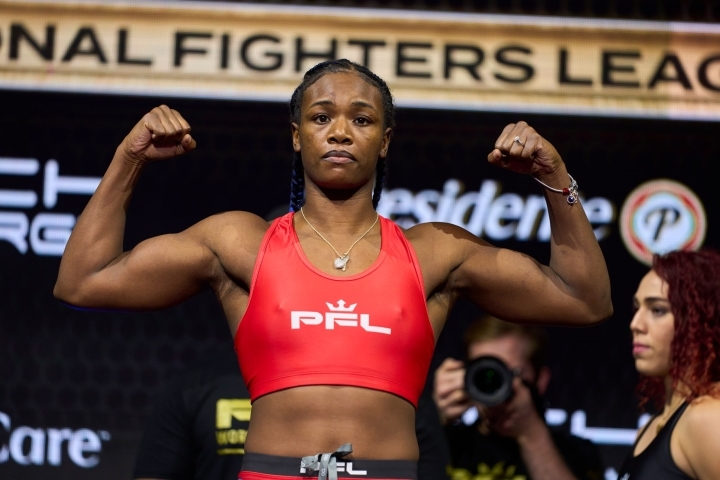 There isn’t a time when she’s in a boxing ring that Claressa Shields doesn’t think she is capable of dominating her opponent.

The three-division boxing champion wasn’t nearly as sure of herself when she made her mixed martial arts debut against Brittney Elkin on June 10 in Atlantic City, New Jersey. Shields feels she was entirely too concerned with what Elkin would do if she took Shields to the ground, rather than taking the fight to Elkin as soon as it started.

That strategic mistake caused Shields some difficulty on the ground during the first and second rounds of a Professional Fighters League bout Shields won by third-round technical knockout at Ocean Casino Resort. Shields recovered from those troublesome moments to batter Elkin until their scheduled three-round bout was stopped 1:44 into the final round.

The 26-year-old Shields has worked hard on her ground game since she won her first MMA match four months ago. She’ll encounter an opponent, Abigail Montes, who is better on her feet than on the ground in Shields’ second bout on a PFL card Wednesday night in Hollywood, Florida.

Montes, meanwhile, will face an elite boxer who is “100-percent more comfortable” than Shields was when she entered the cage to battle Elkin (3-7), a fellow American. Shields-Montes will be the third of five fights ESPN2 will air as part of a PFL broadcast set to start at 8 p.m. EDT from Seminole Hard Rock Hotel & Casino.

“I want them just to see the improvements and know that it’s not gonna be something overnight, to where I’m just a Holly Holm or an Amanda Nunes overnight,” Shields told BoxingScene.com. “But they’ll be able to see the changes, to see the transformation from my first fight to my second fight to my third and fourth fights. They’ll be able to see the potential to be as good as those girls – that it’s on the way, that it’s coming and that it’s not impossible. So, that’s all I really want my fans to take away from it, that I’m the GWOAT in boxing and I’m working on being the GWOAT in MMA.”

Shields, also a two-time Olympic gold medalist in boxing, understands that she is very much a work in progress in MMA. If she defeats Mexico’s Montes and leaves the cage unscathed, Shields (11-0, 2 KOs) will take a very brief break before she starts training for her next boxing match – a 10-round defense of her WBC middleweight title against Slovenia’s Ema Kozin on December 11 in Birmingham, England.

Should Shields conquer Kozin (21-0-1, 11 KOs), she could meet nemesis Savannah Marshall in her subsequent bout. England’s Marshall (11-0, 9 KOs), the only opponent to beat Shields in a professional or amateur boxing match, has agreed to defend her WBO middleweight title against an opponent to be determined on the same card as Shields on December 11.

The Flint, Michigan, native is fully focused Wednesday, however, on continuing her ascent in MMA by beating the 21-year-old Montes (2-0, 1 KO).

“If I had to compare the two, Brittney Elkin was definitely better on the ground than Abigail Montes is,” Shields said. “But at the same time, Abigail has better striking than Brittney Elkin. And from her fights that I’ve seen, she likes to come forward, be in your face, throw those punches and kicks and, you know, just push you around and get you on the cage and just try to bully you in those types of areas. But me, it’s like I come to fight and both girls she fought, they looked like they came to lay down to me. And I’m not someone to lay down. I just can’t wait to get in there and actually fight her.”

Shields is more concerned entering this second MMA match with implementing the technical improvements she honed during her recently completed training camp at the famed Jackson Wink MMA Academy in Albuquerque, New Mexico. While pleased she disproved skeptics that predicted she would get “embarrassed” or “James Toney’d” in her MMA debut, Shields is eager to perform better Wednesday night.

“My main thing is to get my mindset in MMA to what it is in boxing,” Shields said. “I think something that worked in Brittney Elkin’s favor is that I was too worried about what she was gonna do, and I’m never like that in boxing. So, that was a learning experience. It was like, ‘Don’t worry about what she’s gonna do. You go out there and do what you wanna do.’ If I would’ve done what I wanted to do and went out there and punched her in her face in the first round, then I might have gotten a first-round knockout.

“But instead, I was so worried about, ‘Oh, is she gonna take me down? Oh, she’s trying to throw kicks. What is her game plan?’ I was just too worried about the stuff she was doing, instead of just going out there and, you know, doing me.”

Benavidez vs Plant Is ON for March 25 on SHOWTIME PPV in Las Vegas
FURY to USYK “If Contract Not Signed Soon WE’RE MOVING ON!”
It’s official, Jake Paul and Tommy Fury will settle things once and for all 🥊#PaulFury
De La Hoya Optimistic that Tank-Garcia Will Lead to More Collaboration With PBC
The Beltline: Just as boxers must do better, we must know not to expect perfection