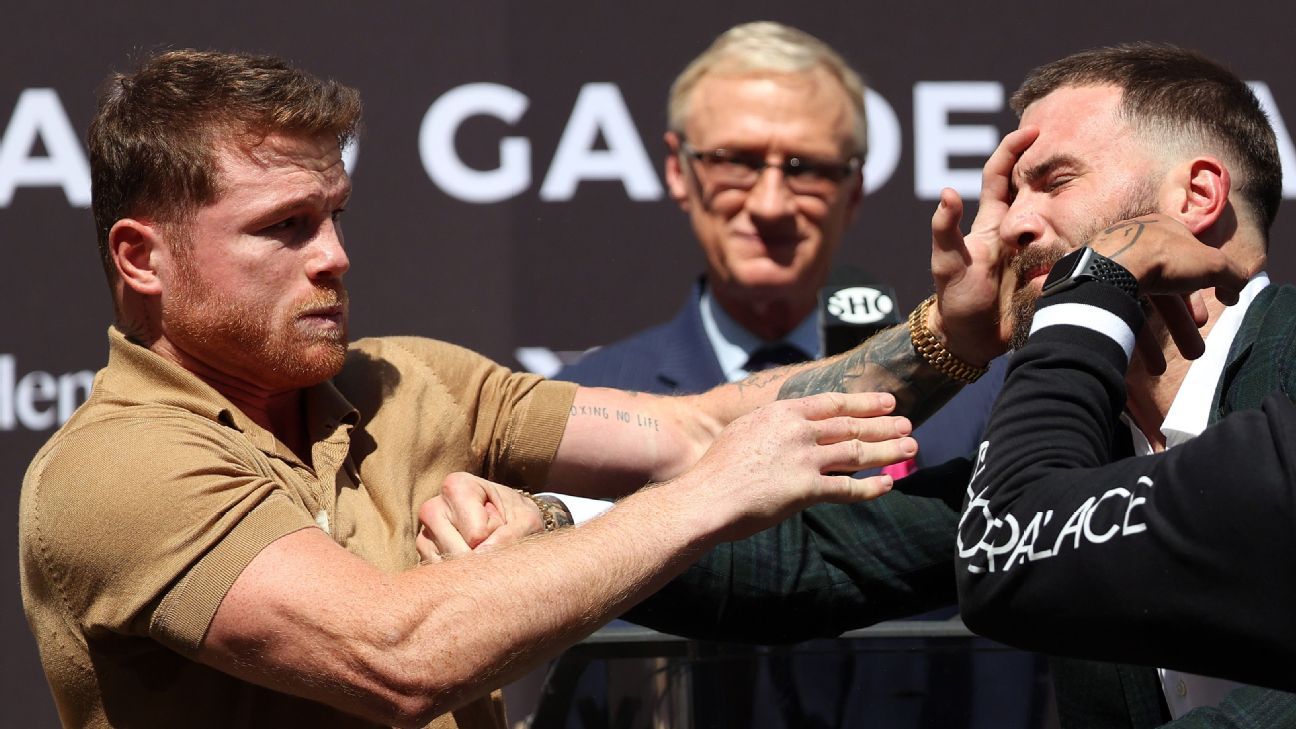 When COVID took hold of the world in March 2020, it also greatly hampered sports, but perhaps none more so than boxing. After all, the fight game hinges on major live gates to deliver its truly marquee events. While the other major sports leagues experienced plenty of pauses and cancellations, the pandemic never stopped the best teams from facing one another. But in boxing, with no fans initially allowed followed by limited audiences, the big fights had to wait.

Look no further than the saga to find a date for the trilogy meeting between Tyson Fury and Deontay Wilder. With COVID restrictions a major issue last year — and even in the early part of this year — promoters found it difficult to find the funds necessary to stage many of the biggest matchups in boxing.

But now, with the return of full audiences, boxing is officially back. The best proof of that: The loaded final two months of the year, full of high-stakes showdowns featuring some of the biggest stars in the sport.

Starting next week, there’s a notable bout every week until the week leading into Christmas Day, and also one final fight of note just before New Year’s Eve. Which matchups stand out above the rest? We rank the top 10 in order of intrigue:

Canelo Alvarez and Caleb Plant punch each other at their news conference Tuesday afternoon.

Storylines: At a heated press conference last month in Los Angeles, it became apparent just how much Alvarez and Plant dislike each other. Alvarez threw a punch at Plant, and the American emerged with a cut under his right eye.

The insults flowed freely from there. Plant hurled remarks at Alvarez’s trainer, Eddy Reynoso, and continued to call Canelo a cheater. The Mexican star said during a recent open workout at his gym in San Diego’, that he’s never had this much bad blood for an opponent before. The feeling seems to be mutual rather than simply prefight histrionics meant to promote the event.

What’s at stake: Not just the undisputed super middleweight championship, but Alvarez’s status as the unquestioned pound-for-pound king. At this juncture, it’s not enough for Canelo to win: He must do so in convincing fashion.

Plant is a sizable underdog, but there’s no doubt that Plant is a talented boxer with quick hands, a strong jab and impressive defensive ability. Combining those qualities to pull off the upset is another matter. Plant enters the fight with one of the major titles, while Alvarez will wear three to the ring; the winner will become the first four-belt champion at 168 pounds in boxing history.

Terence Crawford explains what took so long to get his upcoming fight with PBC’s Shawn Porter done.

Storylines: Finally Crawford will face a fellow top-notch welterweight after years of searching for a fight with one of PBC’s 147-pounders. With Porter’s relentless pressure style, strength on the inside and experience in big fights, he figures to present Crawford’s toughest challenge to date.

What’s at stake: Crawford’s welterweight title and his standing as ESPN’s No. 2 pound-for-pound boxer. That spot on the mythical rankings is due to the vaunted eye test rather than whom Crawford has defeated. If Bud struggles at all, there are those who will claim he was always overrated.

But if Crawford can dispense of Porter emphatically or even make it a wide-points victory, his stock will soar. Porter’s three defeats all were tightly contested on the scorecards, setbacks against Kell Brook, Keith Thurman and Errol Spence Jr., and he has never been knocked out as in his pro career. Crawford has a chance to make a statement with a win.

Storylines: Haney believes he’s the most-avoided boxer in the world, and for a time, he had a case. He had no luck luring any of the top 135-pounders into the ring despite holding a title (whether you think he’s a legitimate champ or not is another matter). But when Ryan Garcia, who was scheduled to fight Haney on Nov. 27, injured his hand, this matchup suddenly made too much sense to be ignored.

Haney and Diaz have exchanged fighting words for months on social media, and finally, it will come to a head: two men out to make the leap to the next level.

What’s at stake: Haney is ESPN’s No. 3 lightweight and also No. 3 on the list of top 25 boxers under 25. He proved in his May victory over Jorge Linares that he’s an exceptional boxer with a terrific jab and defensive skills; he also showed vulnerability.

Just how good is Haney? We’ll find out against Diaz, a pressure fighter with high-level fundamentals who is battle-tested on the top level. His lone pro defeat came at 126 pounds against the ultra-talented Gary Russell Jr. Now Diaz has the chance to show he’s better than ever in his third weight class.

Storylines: This is the 9th different date for this lightweight championship fight after a lengthy battle between Triller and the camps for both boxers. After Lopez tested positive for COVID, scrapping the June 19 date, numerous shifts led to the IBF finding Triller in default. Now Eddie Hearn’s Matchroom will promote the bout, Lopez’s first in over a year.

What’s at stake: Supremacy at 135 pounds. Lopez dethroned Vasiliy Lomachenko last October and collected three of the major titles and the WBC “franchise” belt in the process. The victory also vaulted him into ESPN’s pound-for-pound list. All that momentum came to a crashing halt with the various postponements to his first defense.


Storylines: “Tank” Davis finally has a proper foil, at least in terms of event promotion. Romero has taunted Davis at every turn, promising to knock him out and taking aim at his diminutive stature. It’s certainly not the kind of high-profile opponent fans want to see Davis fight, but the bout figures to deliver fireworks with two devastating punchers.

What’s at stake: Davis returns to his more natural 135-pound division after a TKO of Mario Barrios in a 140-pound bout. For Davis, it’s another chance to score an explosive knockout. Romero is unproven, but his free-swinging, awkward style combined with explosive power gives him a puncher’s chance. It’s also another opportunity for Davis to show off his considerable drawing power as one of boxing’s best attractions.

Storylines: This bout has a chance to be the best action-fight of the bunch. Fulton threw over 1,000 punches in his win over Angelo Leo in January, and Figueroa routinely does the same. When it comes to fights below featherweight, this one is most certainly the top level.

What’s at stake: The winner will have a claim as the best 122-pounder in the world. Murodjon Akhmadaliev is currently ESPN’s No. 1 junior featherweight, and he defends his unified championship vs. Ronny Rios one week earlier. Whomever emerges from Fulton-Figueroa with his hand raised, could then unify with the other champion in an undisputed title fight at 122 pounds.

Storylines: For the second consecutive outing, Lomachenko will face a former Lopez opponent as he seeks to bait Teofimo into a rematch. Lomachenko fared far better vs. Masayoshi Nakatani than Lopez did — scoring a stoppage in dominant fashion while Teofimo struggled in a decision win.

It will be hard to replicate that success against Commey, a man Lopez knocked out in just two rounds. Commey isn’t a spectacular opponent, but he’s a strong, hard-nosed fighter who sits comfortably inside ESPN’s lightweight rankings.

What’s at stake: For Lomachenko, it’s an opportunity to prove he’s still one of the best pound-for-pound boxers in the world — that means taking care of Commey in explosive fashion. Commey, with an upset victory, can thrust himself immediately into the title picture.

Storylines: GGG fights sparingly these days as he approaches his 40th birthday. He fought just once in 2020, and that was against a middling opponent in Kamil Szeremeta.

Murata is far from an elite opponent, but he carries name recognition, a middleweight title, and most importantly, is a major star in Japan where the fight will take place. More than anything, that will give Golovkin the big-fight feel he’s looking for.

What’s at stake: GGG needs an emphatic performance to prove he’s still a formidable fighter and a devastating puncher. Fans have short memories and it’s been a while since Golovkin has been in a fight that matters. A title unification is exactly that, and the atmosphere in Japan will add to the event.

If GGG can resemble the fighter we’re used to seeing (and not the version who struggled with Sergiy Derevyancenko in October 2019), the public will no doubt clamor for a third meeting with archrival Canelo Alvarez.

Storylines: Like Golovkin, Beterbiev is fairly inactive these days, so this is a rare glimpse at one of boxing’s most fearsome punchers. Time is running out for Beterbiev to secure a legacy-defining fight, and against Browne, he could have a tougher time than expected.

Despite Browne’s surprising loss to Jean Pascal, he remains a polished boxer-puncher with good movement and a fine jab.

What’s at stake: The Russian is ESPN’s No. 1 light heavyweight, but the unified champ still needs to fight Dmitry Bivol to cement that claim. Against the unheralded Adam Deines in march, Beterbiev was mostly lackluster, before scoring a late stoppage win. Browne has the toolset to trouble Beterbiev.

A convincing victory could put Beterbiev in the driver’s seat for a fight with Alvarez at 175 pounds, or at the very least, a bout with Sergey Kovalev, Bivol or Gilberto “Zurdo” Ramirez.

Storylines: Munguia is the latest rising star out of Mexico, and he appears to improve with each subsequent outing. Munguia is far from a finished product, a big middleweight who relies on size, strength and power.

Against an established veteran like Rosado, he figures to be tested more than ever. It helps that Rosado is coming off the best performance of his career, a blistering knockout of Bektemir Melikuziev. Now Rosado will look to knock off another promising young fighter.

What’s at stake: If Munguia can tear through Rosado as he has many others, the public will take notice. Rosado is far from elite, but he’s faced top-level competition and doesn’t waver when faced with adversity.

That last quality, more than anything, should reveal a lot about Munguia’s character as a fighter in his toughest test to date.