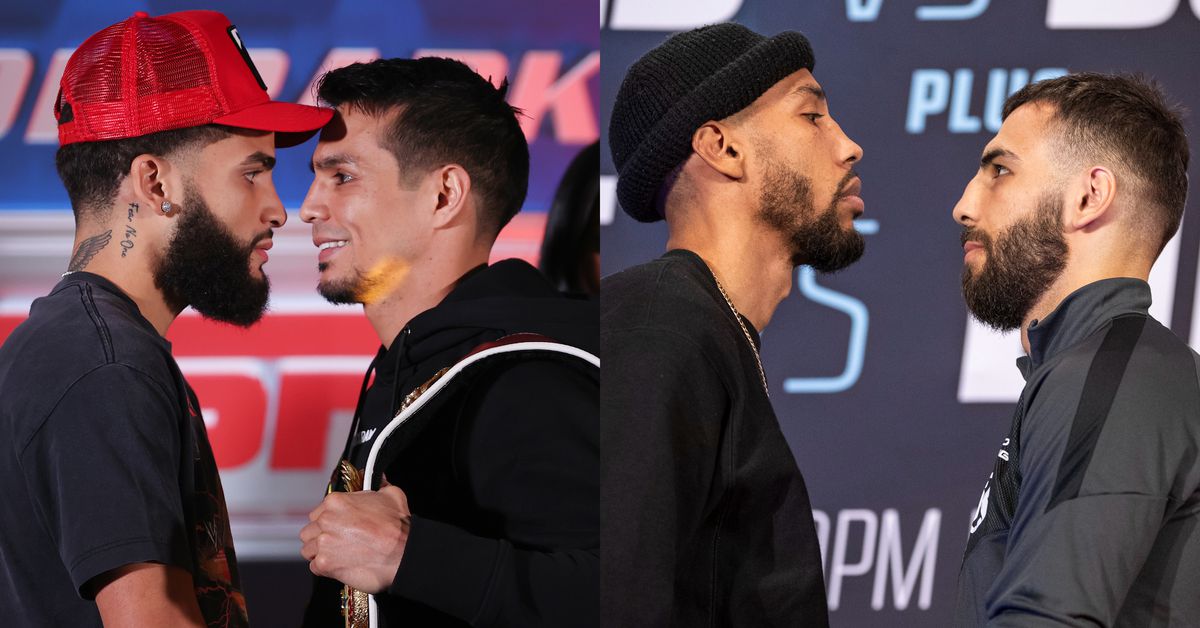 Vargas is a talented fighter, and maybe his speed and skills will be enough. But I almost feel like — given how Zepeda’s fights tend to go the last few years — the better Vargas fights, the better Zepeda might be, too. If Zepeda feels he’s got a sincere threat in front of him, he might turn up the heat and be the guy we saw against Jose Ramirez or Ivan Baranchyk, a real top tier junior welterweight.

I also can’t help but think that Vargas is simply taking too big a step up here. Zepeda is a real contender at 140, and Vargas’ best win is over Kendo Castaneda, probably. If Vargas is as good as Vargas thinks he is, he’s got a great chance. But you don’t truly find out until you’re in with quality opponents. This is Vargas’ shot, but I’m going with the more proven fighter by just a bit. Zepeda UD-10

You all know I like to keep it blunt so rejoice, boxing fans, you can’t really criticize the matchmaking here. This is a really good, evenly matched fight that’s hard for me to get a clear read on. If that’s not a sign of good fight with intrigue, I’m not sure what is. Let’s start with Zepeda, who is 32 years old coming off a unanimous decision over my man Hank Lundy. Lundy is clearly past his best days, but in Zepeda’s previous fight he was able to tame an aggressive Ivan Baranchyk by laying back while finding spots to ambush and unload his combinations. Of course Zepeda isn’t exactly flawless in his execution and found himself on the canvas a couple times against Baranchyk, but he was able to show resolve by getting up and ultimately forcing a stoppage.

As for Josue Vargas, I have to admit that I had questions about his mental fortitude when he started crying in a pre-fight interview with Bernado Osuna, but inside the ring he held it all together quite well and put on an impressive performance. Vargas is a southpaw like Zepeda, but I think is a quicker, slicker version than most of Zepeda’s recent opponents. I have a suspicion that Zepeda will try to force Vargas into more of a firefight than he probably wants to be in, hoping to exploit lapses in defense during exchanges, but I think Vargas has more dimensions to his game than we’ve gotten to see thus far. I’m going to pick Vargas to win a decision. Vargas UD-10

We all know the story at this point: Zepeda fights down to his opponents and expends the minimum necessary energy to do so. He can go from looking like he’d mulch Josh Taylor to looking painfully mediocre at the drop of a hat, sometimes within the same round. Luckily for us, Vargas is aggressive enough to drag “Chon” into an actual fight. Unluckily for Vargas, he doesn’t hit anywhere near hard enough to win an actual fight.

As much as there is to like about Vargas’ crisp offense, there’s a difference between looking good against Willie Shaw and standing up to a top-five junior welterweight. Without the thump to match his come-forward approach, he gets blown up by a straight left at some point. Zepeda TKO-7

This one is easy for me, I’m taking Ennis by a mile. Look, I’ve said this many times about Ennis on this site: I think he’s the real deal, an elite level welterweight who has a real chance to beat any current world champion. Of course the biggest problem for Ennis here is precisely the fact that he’s extremely talented and dangerous, but also isn’t well-known or much of a draw, making him pretty easy for top fighters to avoid. The only way out of that predicament for Ennis to build his profile and fight his way to a mandatory position. It seems clear to me that Ennis is well aware of this, and that’s exactly why I believe he’s going to make an emphatic statement on a national stage so that fans start demanding him to be in the bigger fights. Thomas Dulorme is a good fighter, but Ennis is a special one. I’m taking Ennis to win by stoppage. Ennis TKO-8

This is less interesting a matchup than when it was first booked, back before Ennis ran over the hugely game Sergey Lipinets with ease. Though a superior overall technician than the “Samurai,” Dulorme also relies on grit, attrition, and heavy exchanges in the pocket. That’s just not going to cut it here. “Boots” hits harder, takes a better punch, and boasts insane timing and shot selection that let him throw from the hip with impunity. He takes more punches than he should, sure, but he walked through flush overhand rights from Lipinets without even flinching.

Though Dulorme admittedly did far better than expected against another young gun in Eimantas Stanionis, Ennis isn’t going to let Dulorme tee off on a high guard; he’ll be throwing right back at him, and Ennis’ punches are a hell of a lot scarier than Dulorme. “Boots” smashes Dulorme’s body and head until one or the other gives out around the midway point. Ennis TKO-8

I like James here, not by any sort of blowout, but by just enough to get the cards. He has the height but not reach advantage, but I still expect him to be the better fighter at range, and to hold his own in the trenches enough when Butaev does try to turn up the heat. Butaev also doesn’t always stick with the pressure even when it’s effective, and those lulls could really benefit James and nick him a fair amount of rounds even if Butaev winds up doing the clearer work in several of them.

Pretty much a 50/50 fight, though, or close enough to it. It’s good matchmaking, even if you have to credit the WBA more than anyone for this one, which is always painful to do. James SD-12

Jamal James has a lot of good attributes going for himself in the sense that he’s a good technical fighter with length to pick off opponents as they come in. But the thing about James is he’s also willing to slug it out in spots too, which means he’s willing to take some risks in an effort to get off his own offense. Against Butaev, James should be in some familiar territory as he’s going to be faced with a fighter that’s going to bring the pressure. How James is able to cope with that pressure from Butaev will ultimately determine how this fight goes. Butaev likes to fight behind a high guard and come forward so I think James will be able to score from distance as he times his opponent, but it’s not like fighters can’t get into the inside against James so his defense is going to have to be alert at all times.

Butaev isn’t a flashy fighter but he’s pretty consistently and has a really solid thud on his punches, especially that left hook to the body. Those punches could do real damage to James if he’s able to land clean, and it’s the fact that Dulorme was able to get into that range fairly easily against James (despite losing) that has me concerned about him being able to take shots from Butaev. I think Butaev loses the first half of the fight but makes James exert enough energy that he can’t stand up to the pressure in the back half. Butaev TKO-10

On paper, Butaev’s speed and power make him a real threat to James despite the considerable height difference; it’s not easy to keep James at close range, but it’s far from impossible. If both men followed perfect gameplans to the best of their abilities, I’d favor the Dagestani. Thing is, he’s got a bad habit of not keeping his foot on the gas, which the announcing crew made note of during his narrow and later-overturned loss to Alexander Besputin. James, by contrast, has a terrific engine, which allows him to maintain both his volume and his footwork well into the championship rounds.

Butaev will definitely have his moments, but James’ consistent output and ability to work both at a distance and with in-and-out flurries should let him offset the success Butaev finds inside. “Shango” outworks him to an 8-4 sort of decision. James UD-12