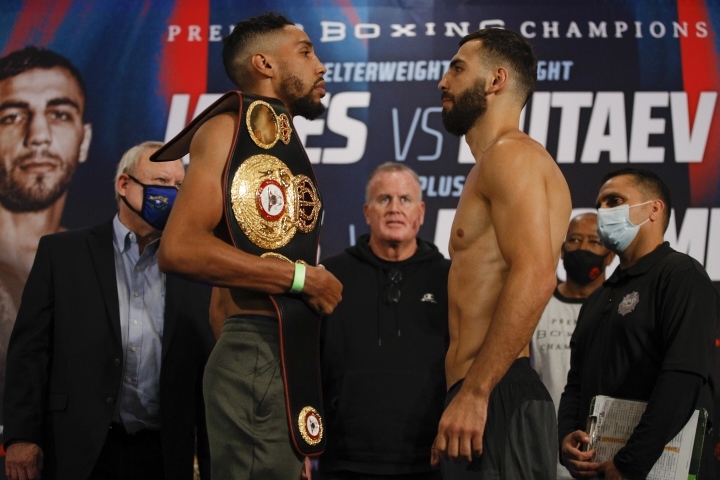 The WBA’s move to finally clean up the mess they made of their own title picture has its pluses and minuses.

The minus, at welterweight, is the reported roadblock in the way of a unification match between WBC/IBF titlist Errol Spence and the WBA’s primary titlist Yordenis Ugas. Coming off a career best win over Manny Pacquiao, Ugas earned the right to cash in and see how farther he can go.

The WBA wants him to engage in a tournament to whittle them down to one welterweight champion for their organization instead. It’s a minus for Ugas and for fans asked to wait far too often for fights that are interesting now.

It’s a plus for both competitors in Showtime’s main event on Saturday night (10 PM EST). Jamal James has one career loss to Ugas. It could be something James gets a chance to avenge for higher stakes if he keeps winning. Challenger Radzhab Butaev had his lone loss two fights ago erased when Alexander Besputin tested positive for a banned substance. Butaev can move his career forward several steps with a win here.

Let’s get into it.

The Pick: James is unusually tall for welterweight but doesn’t have exceptionally long arms to go with it. What James does possess is an ability to fight tall, keep his distance, and apply a canny ability to know when to snap his right hand. James isn’t the quickest fighter in the division but he’s good at lulling opponents before coming over the top with sudden authority. Butaev will come forward and force James to work with constant pressure. The shorter man can close the gap with his jab but he has to use it consistently. Against Besputin, and others, Butaev has sometimes made the mistake of coming forward without punching as he looks to set up heavy hands to the body and head. He waits for shots to open up instead of creating offense off the jab. Against James, Butaev could find himself chasing in spots where he could be scoring.

When Butaev does let his hands go, they release with authority and often in combination. James doesn’t have the hand speed of Besputin so consistently keeping Butaev at range will be a must. It might not be enough. Butaev appears quicker, stronger, has shown a good chin, and is heavier handed. James body will give Butaev a long target. The thinking here is Butaev stays busy enough to gradually break James down for a dominant second half of the fight or late stoppage. The pick is Butaev.