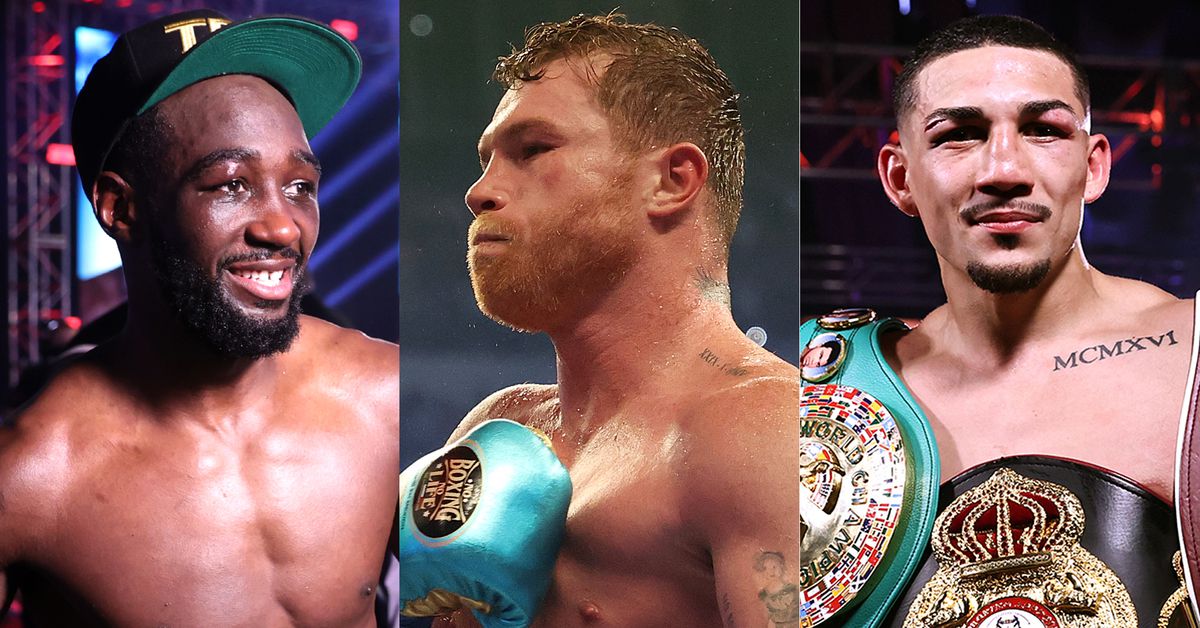 Harper (11-0-1, 6 KO) defends her WBC 130 lb title against Baumgardner (10-1, 6 KO) in Sheffield, England, where Terri should have some good support. Harper is in consistently fun fights; even if she wins in pretty one-sided fashion, she just has the sort of style that is enjoyable to watch. She has defensive lapses and is usually more concerned with her offense.

Baumgardner has lost once, a split decision to Christina Linardatou in 2018. In the shallow pool of women’s boxing, she’s a contender even without doing anything of note since then. If you watch the footage that’s out there for her, which isn’t a ton but it’s all we’ve got, it’s clear she can box, she has skills and above average power. I think this one could really be a sleeper.

It’s kind of weird because he is only 25 still, but it really feels like Munguia (37-0, 30 KO) should be in bigger fights, with due respect to Rosado (26-13-1, 15 KO), a fighter notably better than his iffy win-loss record. It’s just that we saw Munguia break out in 2018, dismantling Sadam Ali to win a 154 lb title, then made a good defense against Liam Smith.

Seven fights and over three years later, Smith remains Munguia’s best win, but you also have to remember the legitimate trouble Munguia had navigating his fight with Dennis Hogan in 2019. He went back to the drawing board after that one, and it was the right move. He got a new trainer (Erik Morales, who’s still there) and tried to become a better fighter. He’s never going to be a slickster or defensive whiz, but he does seem to have tightened up.

Rosado is 35, coming off of a good KO win, and called for this fight back in June, when he smashed Bektemir Melikuziev on the same card where Munguia routed Kamil Szeremeta. Given a relative lack of options for Munguia at 160, it’s a pretty decent fight, and Rosado is certainly crafty and clever enough to expose the holes in Munguia again if he doesn’t get overwhelmed by physicality.

Just finalized this past Friday, a really nice co-feature for the Lopez-Kambosos card. Look at Matchroom putting together two world title fights on short notice with this event when Triller was trying to barf up a garbage undercard back when they actually thought they were going to have the show at all.

Fuzile (15-1, 9 KO) and Ogawa (25-1-1, 18 KO) are fighting for the vacant IBF title at 130 lbs. It’s a good matchup. Fuzile is slick, but Ogawa has proven in the past he can deal with some slickness, at least well enough to compete. I thought Tevin Farmer deserved the win over him in 2017, but it wasn’t totally one-sided or anything, and I don’t credit that entirely to Ogawa being on a banned substance, which he was. He’s a good fighter; both of these guys are good fighters.

Mayer (15-0, 5 KO) and Hamadouche (22-1, 18 KO) both have 130 lb titles, Mayer the WBO and Hamadouche the IBF. What makes this fight better than just the unification thing is the style matchup, Mayer a sound boxer-puncher with great fundamentals and poise, and Hamadouche is — well, Hamadouche fights like a psycho. I mean that with all respect. You could even see it in her one-and-done trip to the Olympics in Tokyo this year.

For three rounds in that Tokyo fight, amateur vet and multiple-time Olympic medalist Mira Potkonen was just barely able to hold Hamadouche at bay enough to win. This is a 10-round fight, and it’s a different game compared to the amateurs. Mayer is a confident, well-schooled boxer, but there just aren’t many women in the game who fight with the wild abandon that Hamadouche does at her best. Maybe Mayer neutralizes it. Maybe she doesn’t. That’s the fun here.

Martinez (18-1, 14 KO) and Arroyo (21-4, 16 KO) have been on a collision course for a while now. The two were previously meant to fight in Aug. 2020, which was canceled when Martinez got a throat infection, and then in February of this year, canceled due to a Martinez hand injury.

It’s a lot to go through for a fight that isn’t that great, but I liked the idea of it over a year ago, earlier this year, and still now. Martinez is an exciting young flyweight champ, a tornado of offense at his best, but I keep having the feeling he’s going to be in for a rough night at the office sooner than later, sort of the way Elwin Soto got handled by Jonathan Gonzalez in October.

Where some people are higher on Munguia-Rosado than I am, I am higher on this one than most people, I think. I’m a big fan of Akhmadaliev (9-0, 7 KO), who is one of the best, most consistent jabbers in boxing, but while “good jab” makes those DARNED CASUALS!! think of boring fights, Akhmadaliev is not boring. He can also crack and he can finish fights.

Rios (33-3, 16 KO) has fought his ass off to get back to this sort of fight, with two world titles on the line, and I’m really not fully counting him out. I think he’s going to be more competitive than may be widely expected, and if he’s gonna go down, he’ll go down giving it everything he’s got.

Hey! It’s finally happening unless one of them tests positive for COVID or gets injured or whatever, and given that this fight is on its seventh (I think?) date and second promoter, I will never say this is happening until they’re both shown in the building on fight night. But let’s stay positive.

This will be the long overdue first title defense for Lopez (16-0, 12 KO), as he puts his WBA, IBF, and WBO lightweight titles on the line against IBF mandatory challenger Kambosos (19-0, 10 KO). Kambosos is a game dude, he’s going to come to win this fight, and he really thinks he’s going to, too — he believes Lopez is looking past him, may have gotten complacent in the last year, and may be guilty of thinking of this fight the way most fans have, which is to say that it will be relatively easy for Teofimo.

Fans can do that if they want, then they have the luxury of going, “Damn, that dude did not take that fight seriously enough” or whatever a day after it happens. Fighters can’t do it. You have to assume Lopez will be focused, ready to go, and ready to do damage and get back to ESPN and some potential huge fights in 2022, and I’m sure Kambosos is prepared for the very best Teofimo.

A terrific matchup between a pair of 122 lb titleholders, as Figueroa (22-0-1, 17 KO) puts his WBC belt on the line against Fulton (19-0, 8 KO) and his WBO belt. This is the sort of fight we need much more of; neither of these guys are huge money headliners, there’s no reason for them to not take the best possible fights like this when they’re easily made, which this one was.

Figueroa has been given more of the star push by Premier Boxing Champions, but Fulton is just a rock solid, very sound boxer; like Akhmadaliev in the same division, Fulton not only has a great job, but he sincerely employs it as a weapon, and it has dominated fights for him against pretty good fighters. Figueroa is more action-based, scrappier, and if he can force Fulton to open up more, this could get really fun. This one’s flying under the radar a hair after being rescheduled, but I love this fight.

You all know about the Canelo-Plant fight, but in brief, Canelo (56-1-2, 38 KO) and Plant (21-0, 12 KO) are fighting for the undisputed super middleweight title. That doesn’t change that Canelo is a massive favorite, but it’s a hugely meaningful fight and since it involves Alvarez, it is a true Big Fight just on that.

I think Plant, like Billy Joe Saunders, may give a good accounting of his boxing skills. Whether he can avoid getting his face smashed or otherwise overwhelmed by Canelo’s skill set is the bigger question.

I could certainly understand having Canelo-Plant in the top spot, but I lean toward this one. It’s not that I think Porter (31-3-1, 17 KO) has so much better a shot at the upset than Plant does, but I think he and Crawford (37-0, 28 KO) have the ingredients for a more fan-friendly fight.

As Crawford has said, Porter absolutely can and will stink up a fight if needed. But I don’t think that’s what this matchup will call for. If he tries to flat out-box Terence Crawford, it just isn’t going to work, even more than it didn’t work when Porter struggled to make weight and had to do that against Yordenis Ugas, escaping with a controversial decision win. This is one where I expect Porter to try and get rugged, which is when he’s really at his best and most dangerous. Shawn gave Errol Spence Jr a damn tough night in the ring doing just that, and given that Crawford is naturally leaner and a bit smaller than Spence, I’d expect Porter to try those tactics again.

Crawford’s also meaner and a nastier finisher than Spence, so that might lead to Porter getting lit up, too. But I think this is going to be a good fight, and it’s the sort of fight we’ve hoped to get from Bud and Top Rank for a long time now. It’s not Errol Spence, no, but right now it couldn’t have been anyway.

BENAVIDEZ vs PLANT Kickoff Press Conference | #BenavidezPlant
BN Preview: It’s risky business for Anthony Yarde as he confronts the fearsome Artur Beterbiev
Trout vs De Angel FULL FIGHT: February 17, 2018 | PBC on FOX
Amanda Serrano: “Undisputed Is The Icing On The Cake”
Showtime will be absorbed into Paramount+, so what could that mean for boxing?