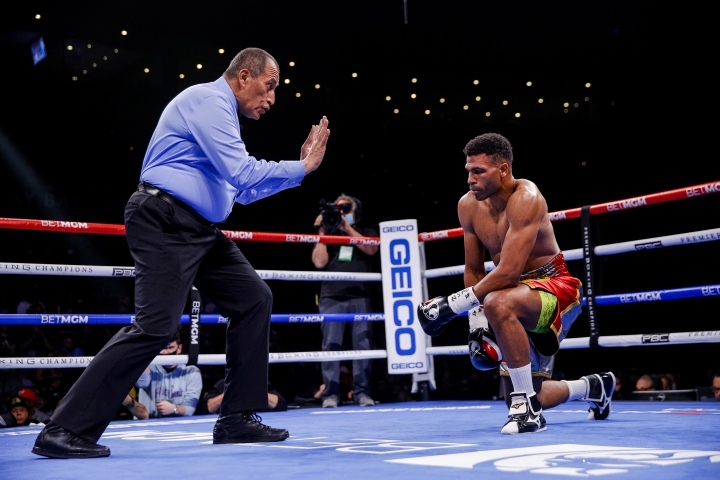 LAS VEGAS – Thomas Dulorme has a mark partially on the back of his head that he and his team consider evidence that Jaron Ennis hit him with an illegal punch early in the first round Saturday night.

Dulorme’s team plans to file a protest on his behalf with the Nevada State Athletic Commission on Monday because Dulorme is certain Ennis’ right hand landed behind his head, not to the side of it, approximately a minute into the first round of a scheduled 10-round welterweight fight Dulorme lost by first-round knockout. Ennis’ downward right hand was ruled a legal punch by referee Mike Ortega after that shot sent Dulorme down to his gloves and knees a minute into the action at Mandalay Bay Resort and Casino’s Michelob ULTRA Arena.

Ortega determined that Ennis’ chopping punch drilled Dulorme, who was bent over, more to the side of his head. Had Ortega concluded that punch hit Dulorme on the back of his head, it would’ve been considered an unintentional foul and Dulorme would’ve been given a maximum of five minutes to recover and continue.

A disoriented Dulorme still answered Ortega’s count at seven, but he never really regained his equilibrium. Ennis sensed his 11th first-round knockout was near and pounced on Dulorme.

Though Dulorme drilled Ennis with a right hand that briefly backed him up, Ennis responded soon thereafter with a right hook and then a straight left hand that dumped Dulorme flat on his back barely halfway into the first round. Dulorme attempted to beat Ortega’s count again, but Ortega waved an end to their fight as Dulorme got to his feet just as Ortega was about to count to 10.

The 31-year-old Dulorme (25-6-1, 16 KOs) lost by knockout or technical knockout for the third time in the Puerto Rican veteran’s 13-year pro career. This was by far the earliest he was stopped, though, as Terence Crawford beat him by sixth-round TKO in April 2015 and Luis Carlos Abregu defeated him by seventh-round TKO in October 2012.