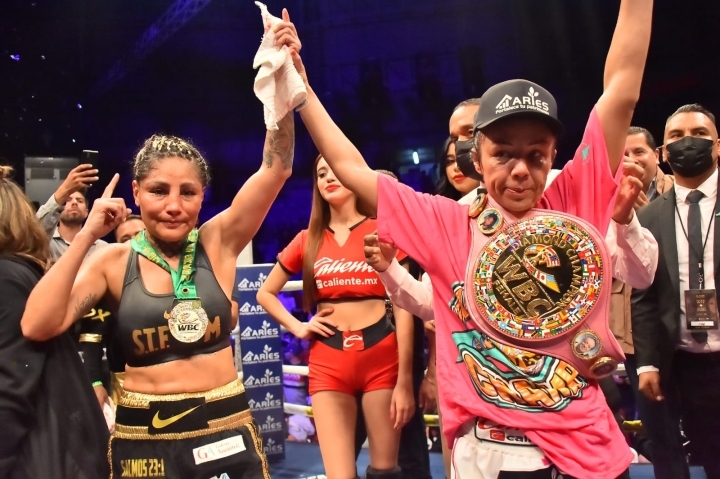 With effective boxing, skill and speed, and with a variety and frequency of blows – Jackie “Princesa Azteca” Nava captured the WBC super bantamweight Diamond belt, with an overwhelming unanimous decision over Mariana “Barby” Juarez in the main fight of the card that Zanfer presented in the Municipal Auditorium of Tijuana.

The fight started with a very good rhythm, with Nava moving towards the front, seeking to connect to the body and unload combinations, while Juárez was more about picking her spots with power blows.

The first two rounds were explosive, with many exchanges of punches, but by the third round both warriors began to show the ravages of the contest. Jackie began to bleed from the nose, and Mariana had inflammation on both cheekbones.

In the fourth, Nava found the ideal rhythm, distance and movements, and from the fifth round on, she was the boss in the ring. In the sixth, Juarez went for a medical check-up at the request of the referee, as she was injured after an accidental head clash. The damage and swelling on the face of Juarez were worrying, but the fight continued.

The seventh round was more technical, although Jackie continued to press and vary her attack. Juarez was trying to counterattack, and connect power shots. The eighth round was all of Jackie, who attacked aggressively, frequently landing with combinations and power shots.

By the ninth round, Jackie came out to box more technical and relaxed, and Mariana wanted to take the opportunity to throw punches more frequently, but the defense of Nava prevented any shift in momentum.

And in the tenth and final round, Nava still pleased the cheering fans, as she began to deliver punishment on Juarez to close the contest strong.

Bob Arum: Location For Tyson Fury-Oleksandr Usyk Fight To Be Announced Next Week
Oleksandr Usyk To Tyson Fury: “I’m Ready To Box You Even Without Any Prize Money!”
Roy Jones ‘Liam Smith CROSSED THE LINE & Lit A FIRE Under Eubank Jr’
Dillian Whyte Wants Both Boxing, MMA Fight With Francis Ngannou: ‘I Would Bash Him’
Panel: How much interest do you have in seeing a rematch between Liam Smith and Chris Eubank Jnr?