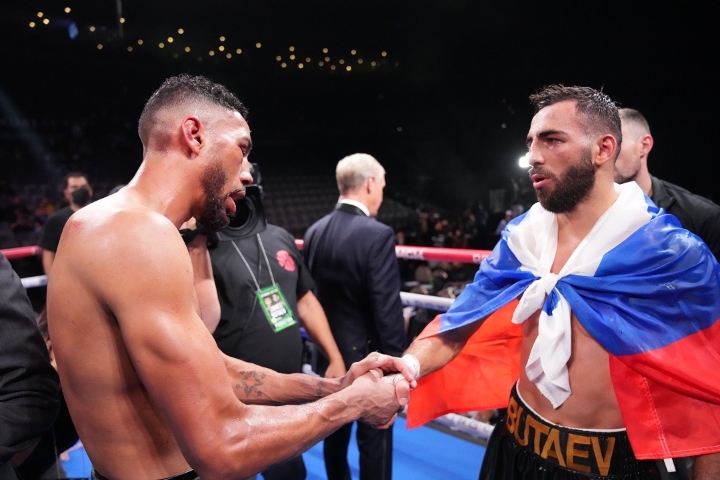 “This is very important for me,” said Butaev (14-0, 11 KOs). “It’s a big first step. It’s always been my dream to become a world champion. I took the first step today and I’m very happy.”

Butaev was able to overcome his rangier opponent with patience and a brutal body attack. While James (27-2, 12 KOs) controlled the initial action with activity, Butaev stalked his opponent and slowly closed down the distance.

The bout began to turn distinctly in Butaev’s favor in round four, as the body punches slowed James output and left him vulnerable to Butaev’s offense. James looked to keep Butaev at bay with awkward movement, which eventually led to referee Celestino Ruiz deducting a point from Butaev in the fifth round.

The deduction did not deter Butaev from coming forward, as he continued to pour on punches and began to bloody James’ face on top of the damage he had dispensed to the body. Butaev out landed James 175-121 according to CompuBox, including 36 body shots and 46 to 36 edge in jabs landed.

James continued to try to find a punch to change the tide, but was unable to display enough power to keep Butaev from coming forward. Eventually, with blood pouring out of James’ nose, the referee jumped in during a Butaev flurry and waived off the fight 2:12 into the ninth round.

“I’m good, it just wasn’t my night tonight,” said James. “A big shout out to Butaev, he did his thing tonight. I’d rather go out on my shield if I’m going to go out. I thought it was a very competitive fight but that’s why we have a referee. He was just a better man tonight. I don’t want to make any excuses. I couldn’t keep him at range and I think rust played a part of it. But that’s boxing. Sometimes it’s not your night.”