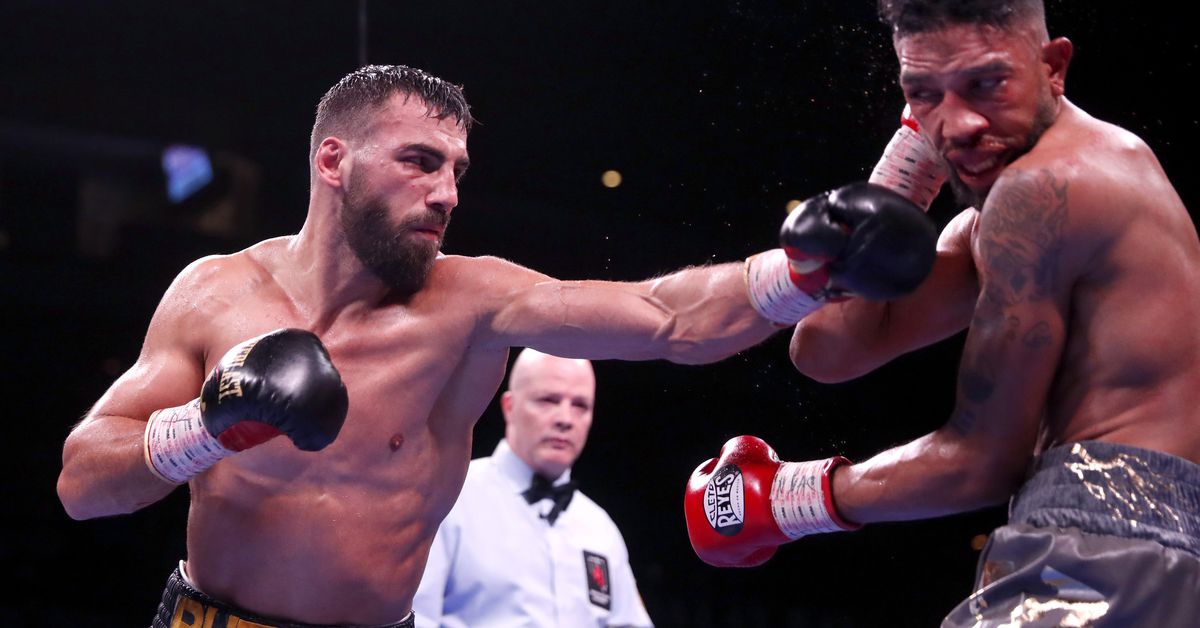 During tonight’s Showtime main event Radzhab Butaev (14-0, 11 KOs) scored a big win, beating Jamal James (27-2, 12 KOs) by forcing a ninth round stoppage in a good action fight. Butaev came out ready to battle James with jabs, except Butaev was steadily targeting the body with his, and after a couple of rounds it was clear that Butaev was starting to do real damage downstairs with James’ body language languishing. Butaev showcased a new wrinkle in his game, spending a lot of time attacking James from the southpaw stance, landing a leaping right hand to the head of James.

As the fight wore on James seemed to be taking shots from Butaev with more and more impact and effect, almost turning his back to Butaev on numerous occasions. In fact in the fifth round the referee deducted a point from Butaev after he landed a shot on the side of James head in what didn’t seem to be justified. Luckily for Butaev the scorecards wouldn’t come into play because despite James’ valiant effort, he was getting busted up pretty good in the fight. In the ninth round Butaev landed a series of hard shots and the referee didn’t like the look of things, stepping in to stop the fight at the 2:12 mark. Some of the Showtime commenting crew thought it was a questionable stoppage, but James was clearly fading and things might’ve gotten much worse.

In the post-fight interview James said he wished he could’ve gone out on his shield but he didn’t blame the referee for the stoppage, saying that as a fighter he will always be willing to fight to the bitter end. Clearly this is a big win for Butaev though, who will move on to much bigger and better things going forward.

In the co-feature, welterweight Jaron Ennis (28-0, 26 KOs) made an emphatic statement, completely blitzing veteran Thomas Dulorme (25-6-1, 16 KOs) to force a first round knockout. Ennis started the fight showcasing his fast jab but it wasn’t long before he unloaded a chopping right hand that put Dulorme down solid. Dulorme would make it to his feet and try to continue despite still being hurt, but a straight right from Ennis would straighten Dulorme like an ironing board moments later, ending the fight as Dulorme would this time be unable to beat the 10-count.

In the post-fight interview ‘Boots’ almost lamented the fact that he didn’t get a chance to showcase more of his skills before the fight was over. Either way Ennis was pleased with the win and says he’s ready for the top names in the division which there should be no question at this point that he’s ready for. When pressed about which title fight he’d like next, Ennis specifically mentioned Errol Spence Jr. Get this man a title shot!

In the Showtime opener Michel Rivera (22-0, 14 KOs) dominated Matias Romero (24-2, 8 KOs) over ten rounds of action, easily taking a unanimous decision on officials scores of 100-90, which I also scored the fight for BLH. Rivera started the fight utilizing a sharp jab and featured that throughout the fight. As the bout progressed Rivera would start mixing in more and more right hands and body shots that scored often on Romero, but Romero was just a tough SOB who showcased a really good chin if nothing else.

Romero was defensive from the get-go and that made things difficult for him because he’s not a big puncher, and also wasn’t throwing enough to even reasonably think he could be taking rounds. Nothing much changed over the entire fight which Rivera swept, but Rivera still intimated in his post-fight interview that he wasn’t really happy that he wasn’t able to get the stoppage.

Yordenis Ugas, Jarrett Hurd Plot Their Returns | The PBC Podcast
George Warren reacts to an incredible Fight of the Year between Artur Beterbiev and Anthony Yarde 🥊
Why we might have to wait until 2024 to see Artur Beterbiev vs. Dmitry Bivol in a must-see matchup
Is Terence Crawford headed to Golden Boy? De La Hoya touts “big moves” in photo
Woman sues Tyson, says he raped her in 1990s