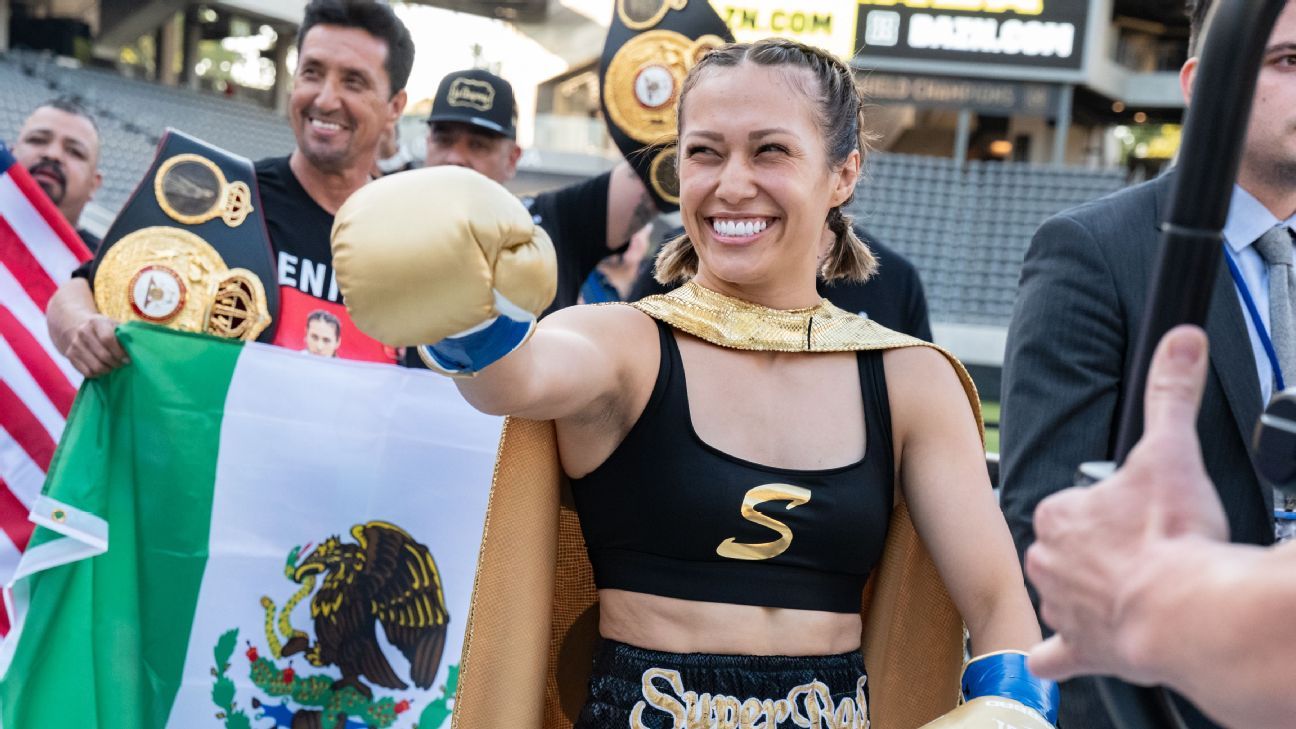 The 30-year-old is the second female fighter to sign with Top Rank, joining Mikaela Mayer, who signed a three-year contract extension earlier this year.

“It’s awesome,” Estrada told ESPN. “It’s like, I’m excited to get back in the ring.”

Estrada’s first Top Rank fight will be later this year, with the possibility of being in November. She said her contract is similar in finances to that of Mayer, who signed a deal for seven figures over the length of the agreement. She is the second woman fighter to sign with Top Rank.

Estrada said she and Mayer talked a lot about the financial side of their contracts — a first for Estrada in speaking with another fighter — and it gave her comfort in what she was asking for. Mayer and Estrada have become friendly in recent months — Mayer even convinced Estrada to join Twitter in April — and now the two will be the main women’s faces for the same boxing promotion.

Money, Estrada said, was part of this. Golden Boy had been her initial high-level promoter and she had done well there, reaching a 22-0 record with nine knockouts — including a seven-second knockout of Miranda Adkins on July 24, 2020 that was the fastest in women’s boxing history.

Estrada, originally from East Los Angeles, had been an active fighter for much of her pro career other than longer breaks during the height of the COVID-19 pandemic. Estrada had hoped to be in the ring earlier this year — she was going to fight in August — but terms couldn’t be agreed upon.

Estrada said part of the reason for her departure from Golden Boy was “I wanted more money, what I felt I deserved.”

Estrada said she also spoke with Eddie Hearn at Matchroom Boxing when she sought a new promoter and almost went with the United Kingdom-based boxing promotion.

Hearn had given her a competitive offer, Estrada said, and the chance to main event and co-main event on DAZN cards. But Estrada said the Top Rank offer made more sense for her — in part because of the platform her fights would be on due to the deal between Top Rank and ESPN.

“Just the whole platform wise and exposure wise would be so much better for me so besides them giving me what I was happy with,” Estrada said. “Yeah, I’m looking forward to that. I’m excited about it.”

Estrada is also the rare women’s fighter who has fought a three-minute round fight as a professional — her technical decision win over Marlen Esparza on Nov. 2, 2019 was a 10-round, three-minute-per-round contest that was stopped after the ninth round due to a cut Esparza suffered as part of an accidental head butt.

Estrada said Top Rank has told her she will often be the main event or co-main event on cards she is on. She also offers the promotion another chance to build fights in Los Angeles, where the No. 6 pound-for-pound fighter in ESPN’s ratings is a draw both because of her Mexican American heritage and because she grew up in and still lives in the area. The 5-foot-2 Estrada has fought 17 of her fights in California.

“That’s definitely something that they want, so I’m happy with that,” Estrada said. “Especially in L.A., they want to put on more shows here in L.A. and knowing that I’m from here, they are hoping I can be able to sell.

“…In L.A., definitely, yeah. I would like to get the chance to show that. That would be great.”