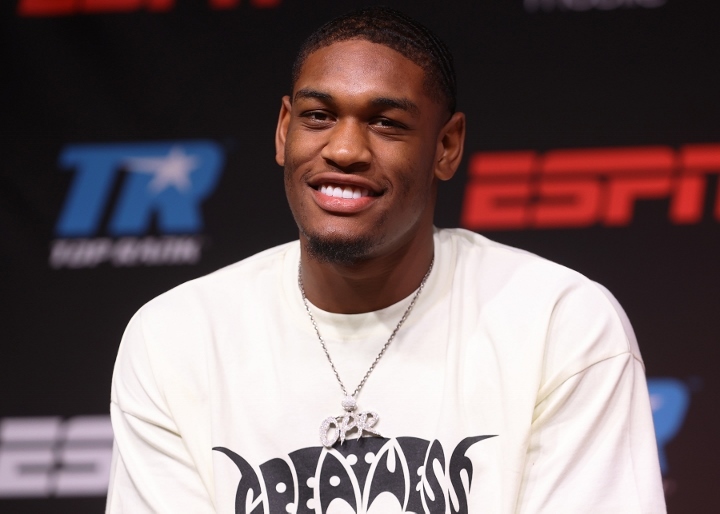 Although his heavyweight journey has only just begun, Jared Anderson is enjoying every bit of it.

The highly touted prospect out of Toledo, Ohio, has schooled everyone that Top Rank, his current promotional company, has placed in front of him. With 12 ring appearances resulting in 12 consecutive knockout victories, the 22-year-old is craving a legitimate challenge.

Nevertheless, Anderson is well aware that the likelihood of him facing a more notable name anytime soon is essentially slim to none. But, during a recent interview with Sky Sports Boxing, Anderson was asked to give his thoughts on a massive step up in competition against Daniel Dubois, the WBA “Regular” belt holder.

“I would love to fight Dubois,” said Anderson.

Dubois, only 25 years of age, currently has his eyes set on facing opponents who are ranked considerably higher than Anderson. In a perfect world, the British native would quickly sign up to take on the likes of Dillian Whyte, Anthony Joshua, or even Tyson Fury. But while the secondary titlist continues in his attempts to fight better competition, Anderson is eager to do the same.

In what amounted to nothing more than merely a tune-up bout, Anderson dominated Miljan Rovcanin, his most recent opponent, stopping him in the second round. Although scoring eye-popping knockouts have placed the braggadocious heavyweight on the pugilistic map, he’s yet to face a memorable name in his young career. In fact, Anderson has failed to allow any of his opponents to reach the final bell.

Considering the skills he’s displayed thus far, Anderson is convinced that in the long run, he could be doing himself a disservice. When he’s eventually ready to challenge for a world title, Anderson believes that he’ll be forced to back whoever holds those precious titles into an inescapable corner.

“We looking for those 10 rounders so that we can actually get ranked and make mandatories. I know that nobody is going to want to fight me. I’m going to have to make people fight me.”

BN Preview: Sunday fun day at Ally Pally as the British cruiserweight title is up for grabs
Troy Williamson and Josh Kelly talk mind games and the true meaning of strength
Hector Luis Garcia says his experience will be the 🗝️ to beating Gervonta Davis on January 7th
Shakur Stevenson On Gervonta Davis: “This Dude Knows He Can’t Beat Me”
Clavel vs Plata unification rescheduled for Jan. 13