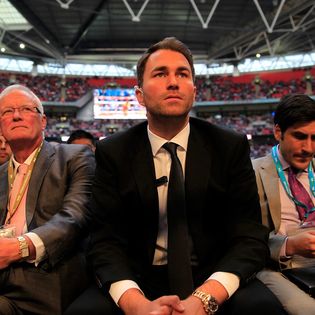 Eddie Hearn, who was rather suspicious from the start of Tyson Fury’s offer to fight Anthony Joshua late this year, has now said outright that, as things stand, a Fury-Joshua bout just ain’t happening. “In our mind, Tyson Fury is not fighting Anthony Joshua,” Sky Sports quotes Hearn (who is Joshua’s promoter) as saying. “We’re more than happy to continue those conversations but what we’ve been told is the deadline has passed.” The deadline was one set forth by Fury, who had ultimately said he would wait until the end of last week to receive a positive response from the Joshua camp. That time has obviously come and gone.

And now, of course, there’s the finger pointing. Fury promoter Bob Arum has accused Hearn of not wanting the fight to go down. “And why doesn’t he want the fight to happen?” Arum asked talkSPORT, “because Joshua’s lost three out of his last five fights and he figures to lose again if he fights Tyson Fury and so Eddie is in effect being an impediment.” Hearn, of course, sees things another way. “They gave us terms ultimately and a date they thought we wouldn’t accept,” he told SkySports. “We did accept that. We were ready to go.”

With that being said, Hearn has indicated that he’s still willing to negotiate a fight contract between the two popular heavies – just not for the hoped for date of December 3’d. “It’s still there,” he said of a possible fight. “It’s still open for discussion. But we’re not going to play a game with a bloke that’s just coming out telling AJ it’s off, and then he’s a dosser, he’s got to sign it, etc…have your fight if you fight someone else, and we’ll do our thing and we’ll see what happens.”

The truth is that December was not an ideal time for Joshua to engage in another major bout. The man just lost his second fight in a row to Oleksandr Usyk late last summer. What’s more, Joshua appeared to be profoundly troubled by the loss shortly after the match. To step straight into the ring – with Fury no less – after such a physically and mentally draining fight certainly wouldn’t be optimal. Still, both Joshua and Fury have made it clear they wanted the December match to happen. And frankly there’s no reason not to believe them. They’re pros, after all. For now, however, it appears each man will have to look elsewhere for an opponent.

Fury: Me and Chisora Are Going To Punch The F— Out of Each Other
” YOU DIDN’T MAKE WEIGHT!! ” Tommy Fury vs. Paul Bamba • HEATED WEIGH IN & FACE OFF | Boxing
DILLIAN WHYTE UNHAPPY WITH ANTHONY JOSHUA…👊🏼❌ #shorts #anthonyjoshua #dillianwhyte
Chisora: Fury bout to deliver ‘best 1st round ever’
Dillian Whyte: I Won Clearly, So Why Would I Consider A Rematch With Jermaine Franklin?