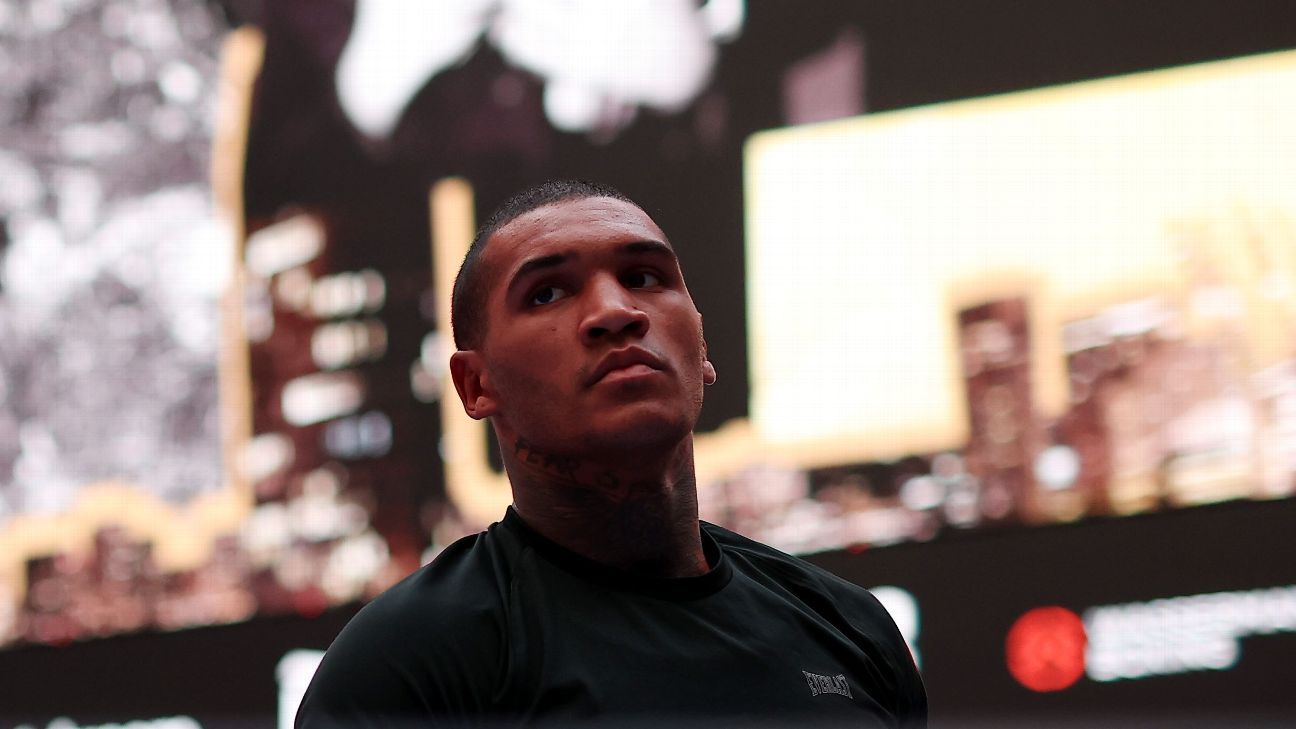 Conor Benn’s fight against Chris Eubank Jr. on Saturday hangs in the balance after the British Boxing Board of Control (BBBofC) said the contest was “not in the interests of boxing” following Benn’s positive drugs test.

The BBBofC, which oversees professional boxing in the UK, has said the fight is not allowed to take place after Benn failed a test for the banned substance clomifene. Benn has said he is a “clean athlete,” adding he intends for the bout to go ahead.

Clomifene is a women’s fertility drug which reportedly can increase production of testosterone if taken on a daily basis by men.

But a source has told ESPN’s Mike Coppinger that Matchroom promoter Eddie Hearn is attempting to obtain an injunction to allow the fight to proceed as planned.

Earlier on Wednesday, Matchroom said the fight at the O2 Arena in London would still go ahead since Benn has yet to be banned by authorities.

“The B sample has yet to be tested, meaning that no rule violation has been confirmed,” Matchroom said in a statement Wednesday.

“Indeed, Mr. Benn has not been charged with any rule violation, he is not suspended, and he remains free to fight.

“Both fighters have taken medical and legal advice, are aware of all relevant information, and wish to proceed with the bout this Saturday.”

However, later on Wednesday, the BBBofC issued a statement claiming it has banned the fight.

The BBBofC said: “On the evening of 4th October 2022, the Board of the British Boxing Board of Control Limited resolved that the contest between Chris Eubank Jnr. and Conor Benn scheduled to take place on 8th October 2022 is prohibited as it is not in the interests of Boxing. That was communicated to the Boxers and Promoters involved on the morning of 5th October 2022.”

Clomifene is banned by the World Anti-Doping Agency, and the doping test on Benn was carried out by the Voluntary Anti-Doping Association (VADA), an organisation that offers anti-doping practices and programmes in boxing and mixed martial arts.

There are precedents of promoters turning to other sanctioning bodies after failing to secure the backing of the BBBofC.

In 2012, David Haye and Dereck Chisora fought in London under the jurisdiction of the Luxembourg Boxing Federation because neither heavyweight held a British licence.

Speaking after his workout in front of the media, Benn said he has not taken a prohibited substance and intends to get to the bottom of the issue.

“I’ve not committed any violations, I’ve not been suspended, so as far as I’m concerned the fight is still going ahead,” Benn said.

“I’ve signed up to every voluntary anti-doping test under the sun, throughout my whole career I’m tested, I’ve always come back negative, I’ve never had any issues before. My team will find out why there has been an initial adverse finding in my test, but as far as I’m concerned the fight is going ahead.

“I’m a clean athlete and we’ll get to the bottom of this.”

Benn confirmed he has spoken to Eubank, saying his opponent “believes” him when he says he is clean.

“He fully believes, he believes in me, and it’s not who I am, or what I’m about. I’m a pro athlete and he was understanding.”

Eubank held his media workout shortly after and denied that he spoke with Benn, although the fighter said he remains keen to fight on Saturday.

“But my promoters, his promoters, the BBBofC they are going to sort this out.

“I’ve prepared, I’ve done my job, it’s now in the hands of the promoters, the governing bodies, to make this fight happen. All I can do is be ready.

“Of course, there are concerns, but listen, I can’t really say too much. I just can’t. I am ready, I am a clean fighter, I have cut the weight, I’m ready to go. This is all unfolding.”

Benn’s fight vs. Eubank — an extension of their fathers’ 1990s rivalry — had been touted as one of the biggest boxing events in the United Kingdom this year, for a reported £3.5 million purse.

The fight between their sons is set for a 157-pound limit, 10 pounds above the welterweight limit that Benn, 26, operates at. Eubank, 33, has to come down three pounds from middleweight.

Information from Reuters contributed to this report.

10 of the best trilogies involving two British boxers
‘SAM GILLEY, I RATE HIM but I’m confident of beating anyone’ – SEAN ROBINSON
Prograis on Taylor: ‘He Hasn’t Gotten Better … I Might Stop Him’
Backer, Producer Of Zepeda-Prograis Promotion: This Is Not A One-Off; Here To Do This Right
Daniel Dubois: ‘I’m going to shock the world’ on Lerena fight and future clash with Deontay Wilder