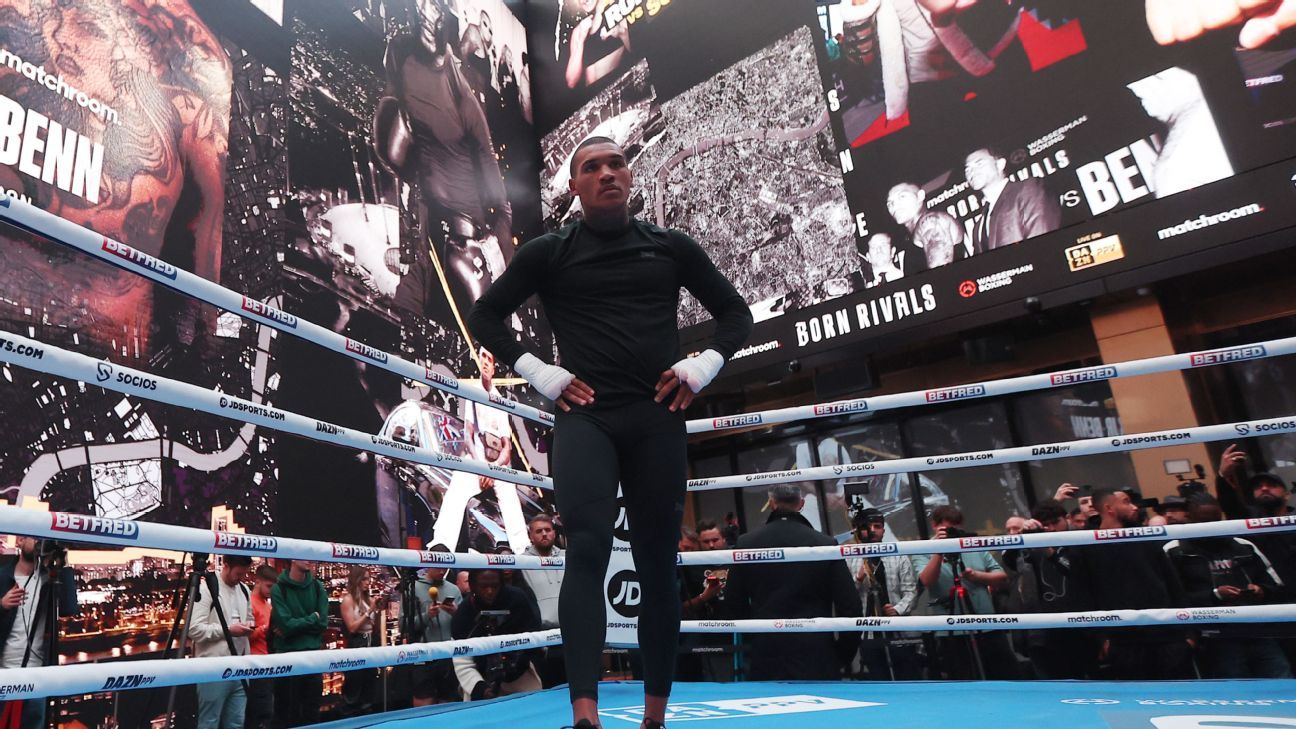 Saturday’s 157-pound fight between Conor Benn and Chris Eubank Jr. has been called off after Benn tested positive for the performance-enhancing drug clomifene, it was announced on Thursday.

The decision came down just hours before the pair were scheduled to hold a news conference ahead of the highly anticipated bout at the O2 Arena in London between the sons of British boxing legends Nigel Benn and Chris Eubank.

A Matchroom statement read: “After discussions with various parties, we have taken the decision to formally postpone the bout between Chris Eubank Jr. and Conor Benn. It is undeniable that the British Boxing Board of Control’s decision to withdraw their sanctioning was procedurally flawed and without due process.

“That remains a legal issue between the promoters and the Board which we intend to pursue.

“However, whilst there are legal routes to facilitate the fight taking place as planned, we do not believe that it is in the fighters’ interests for those to be pursued at such a late stage, or in the wider interests of the sport.

– All you need to know about Benn-Eubank postponement

“As promoters, we take our obligations and duties very seriously, and a full investigation will now need to take place. We will be making no further comment at this time and news for ticket holder refunds will follow.”

Benn’s A-sample tested positive for clomifene, a drug often used to boost testosterone levels, it was revealed on Wednesday. The British Boxing Board of Control said it would not sanction the bout because it was “not in the interests of boxing.”

Co-promoters Matchroom Boxing and Wasserman Boxing were determined to keep the fight on, and the pair sought avenues on Wednesday to get the bout sanctioned, per sources, but it did not come to fruition.

Speaking at a news conference on Thursday, promoter Eddie Hearn said: “It’s been a very difficult day. We were looking forward to an event that has really captured the imagination of the British public, for a fight that has so much history, but we wanted to come here today and formally announced that Chris Eubank Jr. vs. Conor Benn has been officially postponed.

“I want to make it clear that Conor Benn is not suspended by the British Boxing Board of Control. We do feel that he hasn’t been given due process like many others in this situation before him. I also want to clear up so many different reports from journalists and outlets that we have seen today about us being in high court this afternoon and us seeking other commissions. That’s just not true. We [Matchroom] took our time with Wasserman boxing and we made a decision that we felt was in the best interests of the parties involved.

“This is a sport that is very, very dear to us – a sport we have been around our entire lives — and whilst we were desperate for this fight to take place, for the fans and the undercard fighters, we took the decision we felt we had to at this time, especially given the interests of the sport and the British public.”

Eubank’s promoter Kalle Sauerland added: “I have just come from [being with] Chris. He is hugely disappointed. He was ready, he was on weight, and he was very much looking forward to this weekend. My feelings also go out to every single one of the undercard fighters.

“The handling of it [the situation], we feel, was totally inappropriate given the rules, and we now look at plans for rescheduling it.”

Benn (21-0, 14 KOs) said after a media workout on Wednesday that he is a “clean athlete” and denies taking a banned substance, while Eubank (32-2, 23 KOs) said he was still prepared to fight regardless of the test result.

“Clomid (the brand name for clomifene) is a fertility drug that will raise testosterone by 50%,” Victor Conte, the founder of BALCO, told ESPN. Conte served time in prison after pleading guilty to conspiracy to distribute performance-enhancing drugs before founding SNAC, a sports nutrition company.

Clomifene is banned by the World Anti-Doping Agency, and the doping test on Benn was carried out by the Voluntary Anti-Doping Association (VADA), an organization that offers anti-doping testing in boxing and mixed martial arts.

Benn’s fight vs. Eubank — an extension of their fathers’ 1990s rivalry — had been touted as one of the biggest boxing events in the U.K. this year.