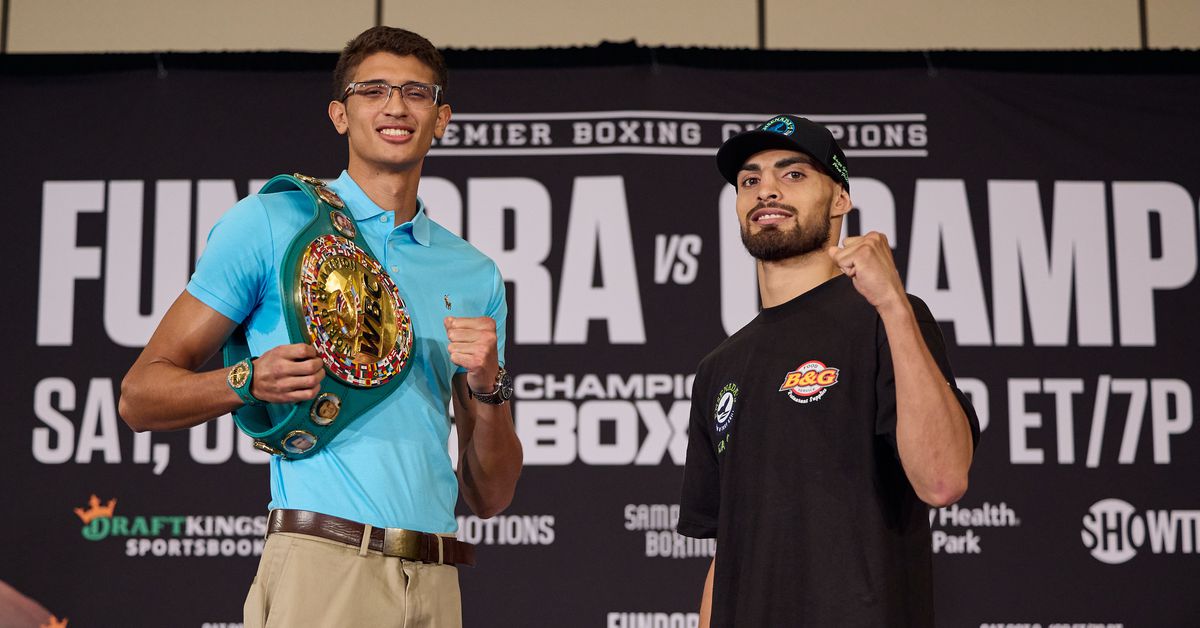 Sebastian Fundora is set to return to action this Saturday night on Showtime, defending his interim 154 lb title against Carlos Ocampo in the main event of a tripleheader.

The show will also feature Carlos Adames defending an interim middleweight title against Juan Macias Montiel, and Fernando Martinez defending the IBF junior bantamweight belt against the man he took it from earlier this year, Jerwin Ancajas.

Fundora’s sister Gabriela Fundora will also fight on the three-fight live stream before the main card on Saturday.

On Thursday, most of the fighters spoke at the final press conference, and here’s what they had to say.

“I feel like I proved to the people that I’m an elite fighter. I can hang with anyone and I can stop them as well. I showed that I have what it takes to become a world champion.

“I’m just going to put on a great performance for the fans. We trained really hard in camp. I’m only worried about what I do in the ring.

“I’m going to keep sending the same message as always, and that’s saying clearly that I’m going to become a world champion at 154 lbs.

“I can guarantee the fans get their money’s worth. We put on a great show every single time, but now that I’m headlining my own show, I’m really going to make sure I put it all on the line. Plus, with my sister on the card, it’s just more motivation to perform.

“I’m excited to be in this position. I’ve fought on a lot of big undercards as well and now it’s my time to take center stage.

“I don’t pay attention to any hype. Everyone has their own opinion, but I’m fighting for the people that support me and I’m going to reward them with something memorable.

“I’ve shown that I have a strong uppercut, but we worked on a lot of different things in this training camp. We work on everything and we work on being consistent so that we can break our opponent down.

“Ocampo might come into this fight to display his boxing skills, or he might come on the inside looking to exchange. I’m confident in my corner and how we prepared and it’s going to show in the ring.”

“You have to take the opportunities that you’re given. I know that Fundora is a strong fighter, but I’m going to be ready for him.

“I’m going to lean on my preparation and training. I’m strong just like Sebastian is. I’m going to have to stick to my training and the results will come with that.

“I’m really proud to represent Mexico on the big stage. That’s my duty and that’s my job on Saturday night. The Mexican fans are all the way behind me and I feel their support

“I want the fans to know that I’m fighting for them. I’ve put in the work day in and day out in training camp, so I know I have to make the most of it. You’re not going to want to miss this one.

“My goal is to wake up on Sunday morning and have it be the happiest day of my life. I want to party with that belt on Saturday night.

“This is going to be a spectacular fight. There are going to be fireworks on Saturday night.”

“My fight against Jermall Charlo gave me a lot of experience and a lot of confidence. I learned a lot. I came out on my feet and showed that I could go toe-to-toe with the best fighter in the division.

“Every fighter has to be confident. I’m glad Adames is confident. But I have the utmost confidence in myself and I’m ready to be the very best version of myself on Saturday night.

“My record speaks for itself. I’ll be ready to knock him out. But if we go 12 rounds, I’m prepared for it. We worked hard so that I’ll be able to take on any challenge that comes my way.

“We’re going to go in there and leave it all in the ring. I already showed that I can take a shot from the best. I don’t know if we can say the same about my opponent, but we’re going to find out Saturday.

“I’m only focused on this fight. A rematch with Jermall Charlo is of course what I want, but I can’t get there unless I win spectacularly in this fight. Saturday night is my time to prove myself.”

“I’m thankful for the opportunity to be showcased once again on this stage. You can expect another all-out war. We’re going to put on a show and give the fans a great fight on Saturday night.

“It’s going to be a hard fight, but being the champion is a responsibility that I take with humility. I have to keep my feet on the ground and make the fans in Argentina happy. The only way to do that is to give it my all on Saturday night and defend my title.

“I have a plan A and a plan B. We’ll be ready for absolutely anything. It’s going to be another great show for fans all over the world. Everyone is going to be happy that they tuned into this fight.

“I’m very motivated for this fight, as much or more than the first time we fought. We’re familiar with each other now, but I’m not taking anything for granted.”

“I’m very happy to be back here in this position. We worked really hard in training and got ourselves in great condition so that we can get our belt back.

“I was not in as good of shape in our last fight. I fought toe-to-toe because my legs were cramping in the fight. Now we’ve prepared for what he does in the ring and we’ll be ready to reclaim our belt.

“This will be a big win for me and for my country. I want to bring this belt back home and be a proud champion for the Philippines.

“I can’t wait to get in the ring. Winning my title back is all I’ve been thinking about since we first fought. I know I have what it takes and I’m going to prove it on Saturday night.”

“It’s very exciting to be here in our hometown fighting together. It doesn’t happen very often. We’re going to bring fireworks and I hope the fans enjoy it.

“The fans should expect a lot of action. We worked really hard in training camp and it’s going to show up in the ring on fight night.

“From what I’ve seen I’m facing a good defensive fighter, but we prepared for that kind of style. I’m very confident with the work we put in at the gym.

“It’s really cool to be fighting on the live stream before my brother’s show. I know that I enjoy watching myself fight and I feel like the fans are going to enjoy it as well.”