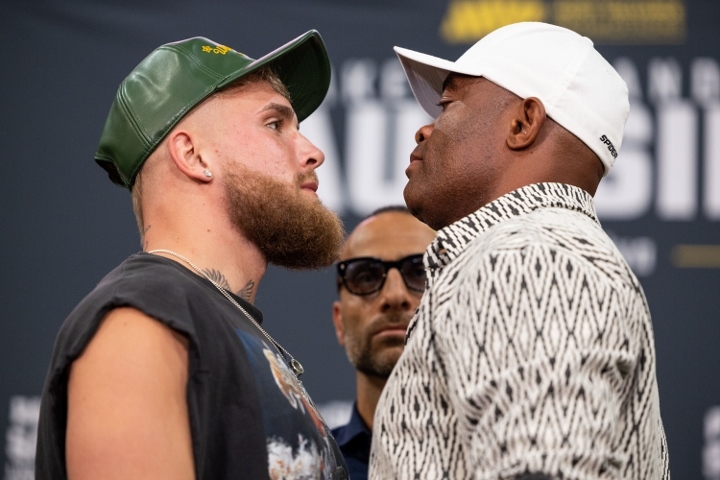 Jake Paul has a feeling his showdown with Anderson Silva will garner him the biggest pay-per-view numbers of his nascent boxing career.

The controversial Paul (5-0, 4 KOs) was originally supposed to take on Hasim Rahman Jr. in August, but the fight fell through after it was apparent that Rahman would not be able to make the contracted weight limit. (The cancellation of that fight followed on the heels of a boondoggle with Tommy Fury). That fight was regarded by most observers as a risky venture for Paul, as Rahman, unlike Paul’s previous opponents, was an actual boxer, albeit a middling one.

Against Silva, Paul will face a legend of the mixed-martial-arts world, who, while not a natural boxer, is expected to offer a stiff challenge to the Ohioan. Combined with Silva’s popularity and name recognition, Paul believes his sixth professional fight will net him high figures at the box office.

“I do think this will be the biggest pay-per-view (of my career),” Paul told MMA Junkie. “I would say, yeah, I would be happy with anywhere from 300-500,000 (purchases), but I think it can get all the way up to 600 or 700,000, depending on how the fight week goes and the promotion and if ‘All Access’ performs well. I think this could be the biggest one for sure.”

Paul’s last fight, a rematch with former MMA champion Tyron Woodley in December, was reportedly a flop. Paul came out denying some of the numbers floating around at that time but conceded that it was “not my best business night.” Paul has claimed his first fight with Woodley generated in excess of 500,000 buys.

Paul has fought his last few fights on Showtime, which will also be distributing his pay-per-view fight with Silva. Paul has voiced an interest in fighting the likes of former Conor McGregor and Nate Diaz in the future.

Shakur Stevenson On Gervonta Davis: “This Dude Knows He Can’t Beat Me”
Referee Carlos Padilla Admits He Helped Pacquiao Win Fight in 2000; Opponent, Family of Ref Respond
The Beltline: Colonel Chris, Kentucky Fried Chicken, and a pay-per-view fight in need of seasoning
Shane McGuigan believes Daniel Dubois has the tools to climb to the top of the Heavyweight ladder
‘SAM GILLEY, I RATE HIM but I’m confident of beating anyone’ – SEAN ROBINSON