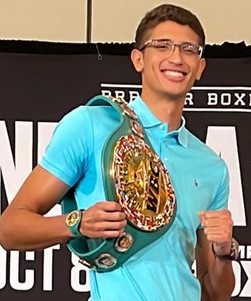 WBC junior middleweight intern titlist Sebastian Fundora will be back in action tomorrow night in Carson, California, when he faces the 34-1 Carlos Ocampo in a scheduled 12 rounder. The 19-0-1 Fundora is known as much for his towering 6’6 height as he is his ring ability. This can, and perhaps has, led the 24 year old to being underestimated. “The working theory on Fundora,” writes Brian Campbell for CBS Sports, “had been that he’s nothing more than an attraction — a boxing oddity because of his spidery frame — who will get folded the first time he steps up and fights a puncher. The problem with that theory is that it hasn’t happened.”

Sure enough, Fundora was able to get off the mat to eventually stop the then undefeated and highly skilled Erickson Lubin back in April. Now he’s in line for a world title shot, provided, of course, that he best Ocampo. That’s not something that’s guaranteed. Ocampo’s sole loss, after all, came at the highly esteemed gloved fists of welterweight kingpin Errol Spence – and that was well over four years ago. The man’s gone 12-0 since that time. Still, Fundora remains confident on the eve of Saturday’s Showtime-broadcasted fight.

“I feel like I proved to the people that I’m an elite fighter,” he said during a Thursday press conference. “I showed that I have what it takes to become a world champion.” Will he have what it takes to defeat the determined Ocampo, however? Fundora is clearly the favorite walking in, but upsets abound in boxing. “In the boxing ring you have to be focused,” Fundora told ESNews. “You just have to show your A-Game.” With a future fight with undisputed junior middleweight champ Jermell Charlo (or Tim Tszyu, who Charlo is expected to fight next) on the line, it’s hard to imagine Fundora not bringing his A-Game into the ring with him at the Dignity Health Sports Park on Saturday.

When asked at Thursday’s press conference what he’d like to say to the fans who will show up live to watch Saturday’s matchup, the mild mannered Fundora spoke with confidence. “I can guarantee you your money’s worth,” he said. “This is my real first main event. I’m going to make sure you guys get what you want. That, and my sister’s fighting as well, so it’s going to be a great night.” Sure enough, Fundora’s sister, the 8-0 Gabriella Fundora, will be in action Saturday, as well. For the Fundora’s, the fight game is clearly a family affair.

This Weekend’s Biggest Fight Doesn’t Involve Heavyweights
Prograis on Taylor: ‘He Hasn’t Gotten Better … I Might Stop Him’
Ryan Garcia on Tank: Once He Gets Hit, Let’s See How He Reacts!
The Outsider: Opportunity knocks for Kevin Lerena
Dillian Whyte: “People Are Thinking I’m A Wounded Lion”