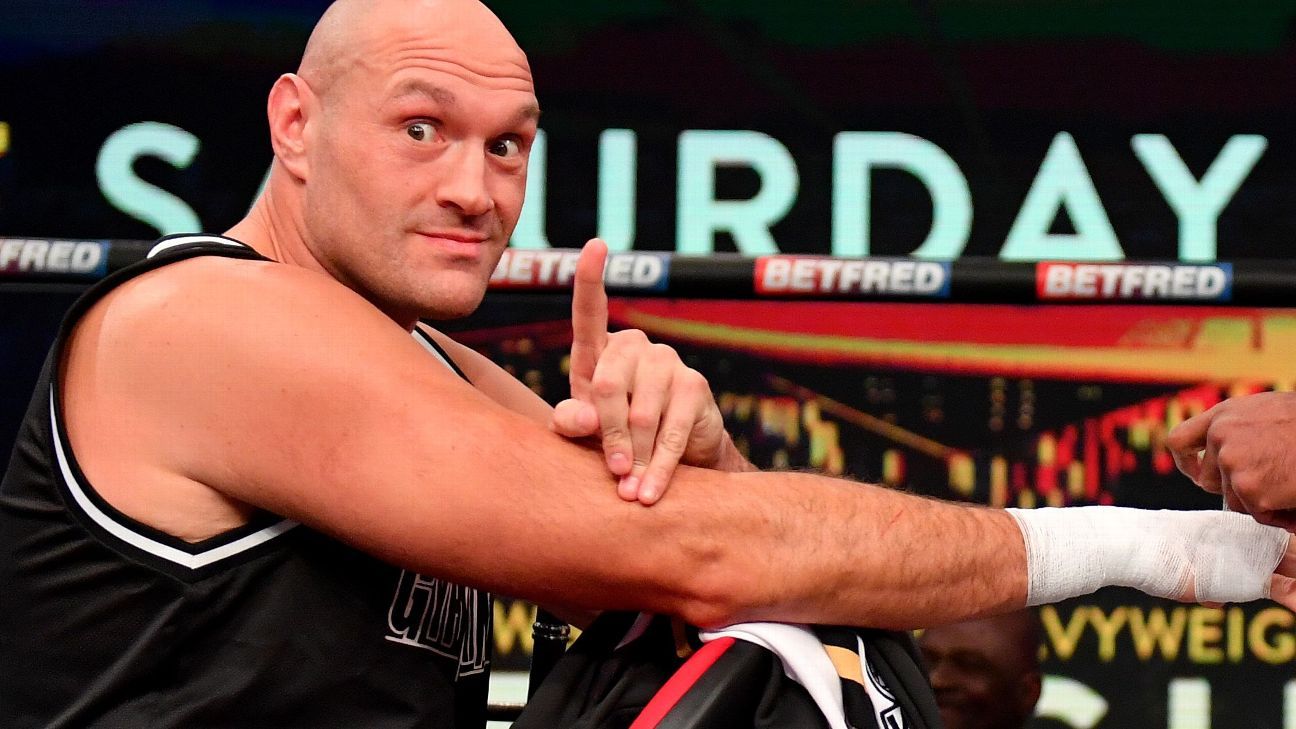 Tyson Fury’s retirement claim lasted just a few months, and as he prepares for a heavyweight title defense vs. Derek Chisora on Saturday in London (12 p.m. ET, ESPN+), the “Gypsy King” told ESPN he’ll fight on “as long as the body will let me.”

“I’m pretty f—ed up with injuries,” said Fury, ESPN’s No. 6 pound-for-pound boxer. “I’m like a car with half-a-million miles on it. … My body’s worn out. … I decided to come back ’cause I was bored, basically. And I can still knock mother—ers out and get paid to do it.”

The 34-year-old from England announced his retirement after a sixth-round TKO of Dillian Whyte in April but months later revealed plans to fight Chisora, a 10-1 underdog. There wasn’t any demand for a third bout between the pair, but Fury wanted to remain active while he continues talks with Oleksandr Usyk for an undisputed heavyweight championship fight that could take place in March in Saudi Arabia.

Even if Fury (32-0-1, 23 KOs) accomplishes his goal by unifying all four titles, he indicated his career could continue for years, but the wear-and-tear of heavyweight boxing has begun to take its toll.

Both of his elbows required cortisone shots before his third fight with Deontay Wilder last November. Fury survived two knockdowns and scored the 11th-round KO of Wilder in ESPN’s Fight of the Year. Afterward, Fury underwent a six-hour surgery on both elbows to remove bone spurs.

“And now I just got to try and block the shots or whatever. … I’m just going to keep punching until I can’t punch anymore. Hopefully down the line somewhere get an arm transplant or some s— like that.”

In the absence of such futuristic medicine, Fury has indeed adapted his fighting style. The 6-foot-9, 270-pound heavyweight is well-regarded for his smooth footwork and brilliant jab. His deft movement belies his size, and it allowed him to outbox Wladimir Klitschko to claim the unified heavyweight championship in 2015.

The fight was far from entertaining, but this new version of Fury steamrolls opponents, using his weight advantage to lean on foes and eventually knock them out in brutal fashion.

“I’ve been teaching him 1950s style boxing,” said SugarHill Steward, who took over Fury’s corner before the 2020 rematch with Wilder. Fury was held to a draw in the first meeting under trainer Ben Davison but scored an emphatic TKO in the second bout. “Just mauling and clubbing and knocking motherf—ers out.”

“I’m on a good little knockout roll,” Fury said. “I’ve knocked out my last three opponents in devastating fashion, and I’m looking for victim No. 4.”

He didn’t want to look past Chisora during the interview, but Fury surely hopes No. 5 will be Usyk. The former undisputed cruiserweight champion dethroned Anthony Joshua to capture three heavyweight titles in 2021. Usyk also defeated AJ in the August rematch, and there’s no bigger fight for Fury.

The 35-year-old from Ukraine is ESPN’s No. 4 pound-for-pound boxer, and with his precise punching and incredible movement, Usyk figures to give Fury — especially a less mobile version — the toughest test of his career.

“All the great fighters adapt over the years,” Fury said. ” … The older you get, you gotta get smarter. [Bernard] Hopkins got smarter as he got older, and George Foreman didn’t fight the same in his second career as he did in his first career. He was a lot more relaxed, and he had to change his style up a bit. And that’s what we’re doing.

“I feel like boxing missed me. Boxing’s dull without the Gypsy King. Very boring.”