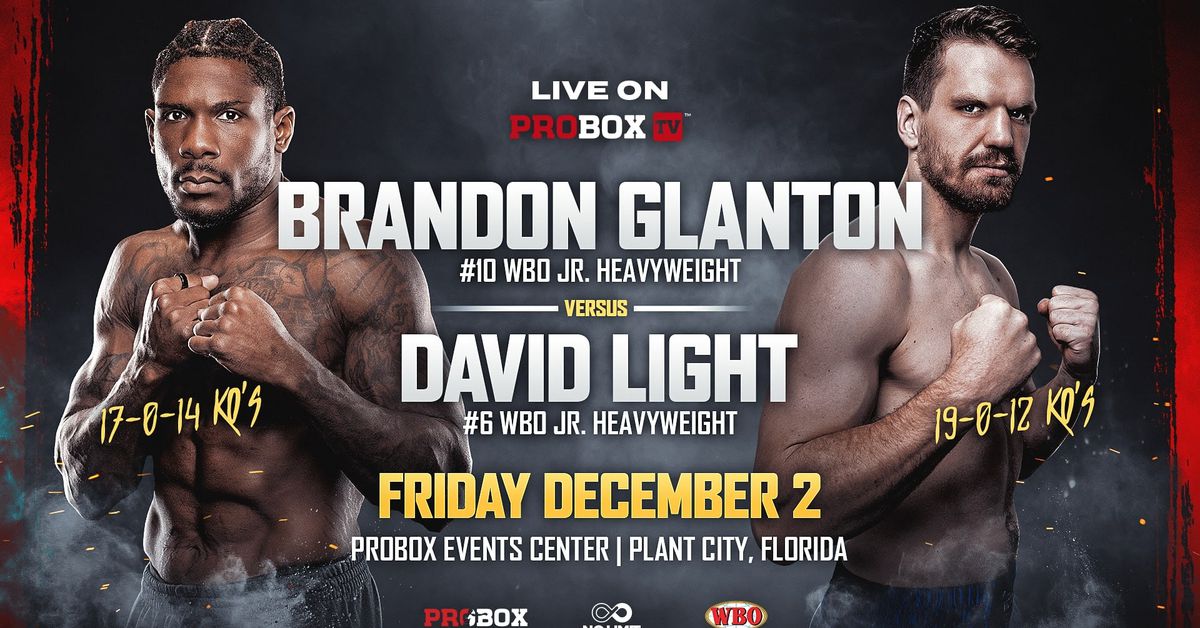 Brandon Glanton and David Light will meet in an intriguing matchup of unbeaten cruiserweights tonight on ProBox TV, and we’ll be here with live discussion and results as they come in, starting at 9 pm ET.

Glanton (17-0, 14 KO) is a 30-year-old American originally from Atlanta, and you may recall him from a really fun upset win over Efetobor Apochi on a PBC card in June 2021. He’s 3-0 since then, but against lesser opposition, probably not so much by choice.

In Light (19-0, 12 KO), he faces a step back up, and quite likely his toughest opponent on paper. The 31-year-old New Zealand fighter was a standout amateur and has real skills. It’s a matchup that may come down to boxer vs brawler, but both of them have some pop, too.

For some reason, not one but two minor WBO belts (both vacant) are on the line here, apparently, so this is jockeying for some WBO rankings positioning. I hope these guys didn’t have to pay sanctioning fees on both straps.

The undercard features some prospects, including 140 lber Jusiyah Shirley, who has been on some ProBox cards, and Top Rank’s Kelvin Davis, the older brother of blue chipper Keyshawn.

Join us this evening!

The BN Preview: Joseph Parker and Jack Massey are The Odd Couple at heavyweight
Overcoming Artur Beterbiev is Anthony Yarde’s toughest challenge yet, but he’s entering the ring without fear
‘When I do hurt him… I’ll finish the job’ Anthony Yarde is ready to put on show 🆚 Artur Beterbiev
Sources: Joyce, Zhang close on April 15 fight
Mike Tyson Sued By Woman For Alleged Rape In The 1990s