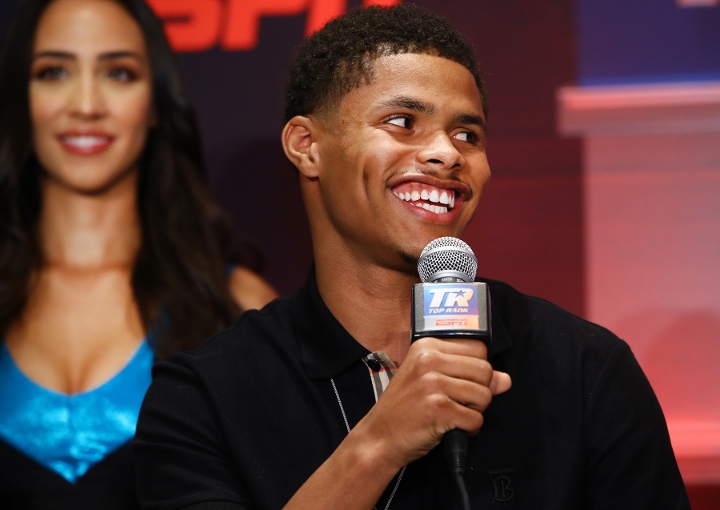 Normally, Gervonta Davis has refrained from getting into public spats. In his view, going back and forth with his opposition is inconsequential, rather, the hard-hitting Baltimore native enjoys doing his talking in the ring. Nevertheless, during a recent curse-filled diatribe, Davis had plenty to say about his fellow contemporaries.

In addition to lambasting Devin Haney, Davis revealed that during a heated sparring session, he “cracked” Shakur Stevenson on several occasions. Also, the newly turned 28-year-old openly stated that in a hypothetical matchup between them, Stevenson (19-0, 9 KOs) would stand no chance.

As his ears perked up in confusion, the former Olympic silver medalist bombastically denied that Davis (27-0, 25 KOs) took it to him during those memorable sparring matchups. More than anything, Stevenson finds the comments of his budding rival to be a bit ironic.

On January 7th, at the Capital One Arena in Washington D.C., Davis is set to take on Hector Luis Garcia in the main event. Should the KO artist register the victory, he’ll then move on to a showdown against Ryan Garcia.

Stevenson, after snagging world titles at 126 and 130 pounds, was forced to hand over both his WBC and WBO super featherweight titles due to his failure to make weight. Moving forward, the 25-year-old will officially compete as a full-fledged 135-pounder, the very division Davis currently competes in.

While the two pound-for-pound level stars continued their war of words, Stevenson refused to bash Davis and his overall skills. In fact, having watched and dissected his game closely, Stevenson is of the belief that Davis is a one-of-a-kind fighter. Be that as it may, the former multi division champion concludes that despite Davis’ brazen attitude, deep down inside, he knows exactly how a showdown between them would play out.

“I ain’t gonna take away credit from the dude. I think that he’s a helluva fighter. I mean, look at him. He’s fighting pay-per-view knocking these dudes out. That don’t take away the fact that I can beat this dude. This dude knows he can’t beat me.”