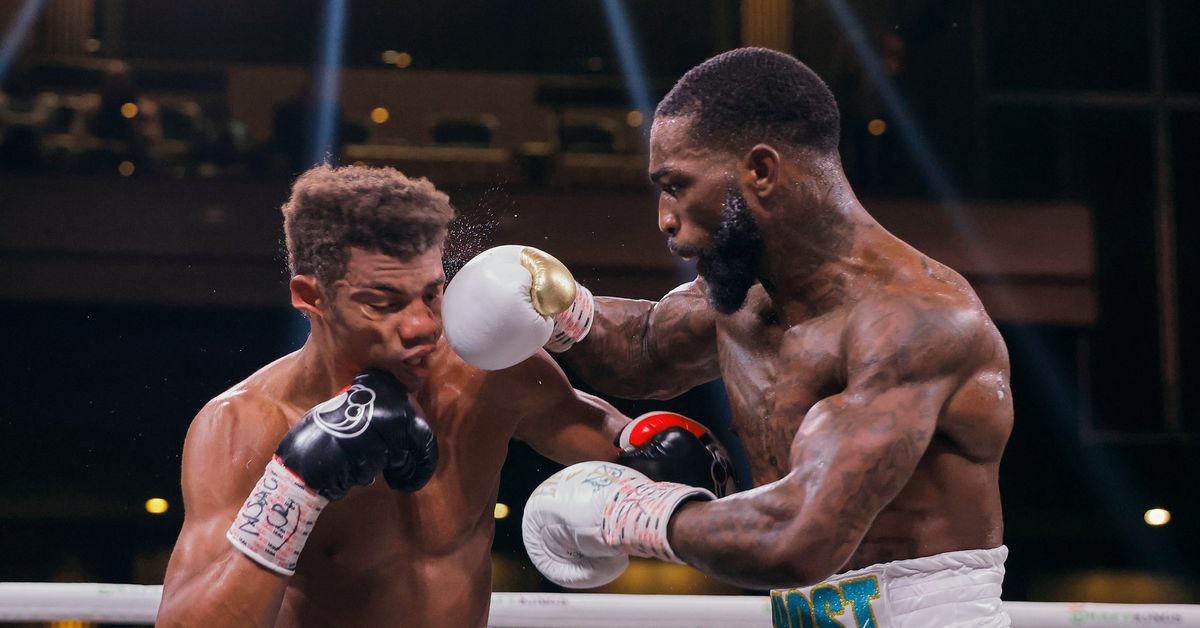 Frank Martin closed out 2022 with a dominant win over Michel Rivera tonight on Showtime, winning a clear decision over 12 rounds in a matchup that was never really in doubt.

Martin (17-0, 12 KO) has picked up some good momentum this year, beating Romero Duno, Jackson Marinez, and now Rivera, each fight a bit more of a test on paper than the last, and none of them winding up too much of a sweat in the ring for the 28-year-old “Ghost,” promoted by Errol Spence Jr and trained by Derrick James.

And if Martin passed his test with flying colors tonight, it has to be admitted that Rivera (24-1, 14 KO) failed his pretty badly. That’s not to write the 24-year-old Dominican off forever, but he was making major tactical mistakes early in the bout that he never corrected, and was looking a little shellshocked by Martin’s speed and timing within just the first couple of rounds.

Any round that Rivera did have an argument in probably came down more to Martin not throwing much than anything special that Rivera did, or any notable success he really had. Rivera was also dropped in round seven, and he just never truly looked like he was in this fight. He’s young enough to get better for sure, but there will have to be some changes.

It’s also possible that Martin is simply special, and he’s talking like he believes that to be the case heading into 2023.

“There were some things I seen in there that I didn’t capitalize on, but I went in there and got the job done,” Martin said. “I could have did a lot more, but what we did tonight worked for us. But there’s a lot of room for improvement to get better, and we’re going to keep working.”

“I believe in myself. I believe in my team. We know what we’ve done in the gym,” Martin replied when asked why he was willing to take a challenge instead of an easier fight on paper. “We work consistently. We believed in it and we believe we’re ready for any of the top fighters. Give ‘em to us, we’re ready to eat.”

Asked if he had a direct call-out to make, Martin just said, “We want ‘em all. We can get Gervonta Davis, we can get Devin Haney, we can get any of those top guys. We’re ready. I see Rolly (Romero) in here, he can get it, too. Let’s make it happen, man.”

BN Verdict: “Basic” Liam Smith does to Chris Eubank Jnr what nobody else has managed to do
Oscar De La Hoya Believes Ryan Garcia – Gervonta Davis Will Be Announced “In The Next Few Days”
Liam Smith Stops Chris Eubank Jr In Fourth Round
Tszyu to face Harrison for interim title in March
Anthony Joshua Reportedly Set To Face Jermaine Franklin In April