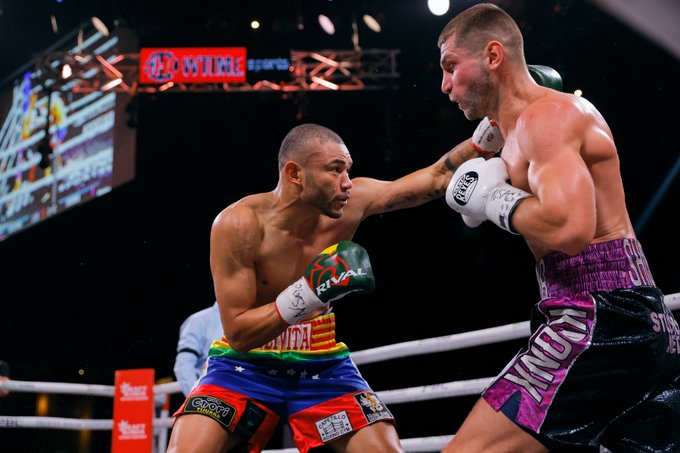 The 34-2 super middleweight Jose Uzcategui squared off against the 13-0 Vladimir Shishkin on the Michel Rivera-Frank Marin undercard Saturday night at the Cosmopolitan in Las Vegas. The fight was a title eliminator and was scheduled for 12 rounds. Uzcategui landed well in the first minute of the opening round. Shiskin worked his jab throughout the chapter while Uzcategui remained on the hunt.

The second round was a fast paced affair, though it was becoming clear that Uzcategui was the harder hitting of the two men. Still, by round’s end, Uzcategui was becoming less aggressive. The third saw Shishkin come alive, peppering his man with one-twos throughout the chapter. The fourth round was action packed, with both men trading strong shots.

Things remained close in the fifth, though it appeared Uzcategui’s shots might have starting taking a toll on his man. Each fighter had his moments in the sixth, though Shishkin couldn’t seem to completely overcome his veteran opponent’s aggressive, move in and strike style. Credit had to go to Shishkin in the seventh, for he simply wouldn’t allow himself to be broken under the weight of Uzcategui’s aggression.

Uzcategui landed cleanly and hard in the eighth, but Shishkin’s punches’ were finding their target in impressive fashion. Both men engaged in sharp shooting in the ninth in what had become and extremely high octane affair. Uzcategui’s pressure propelled the tenth, though Shishkin certainly landed some good shots. Yet Uzcategui continued putting on the pressure in the eleventh.

The twelfth and final round saw both men swing and land as they had throughout the entire entertaining affair. Ultimately, it was Shishkin who walked away with a unanimous decision win.