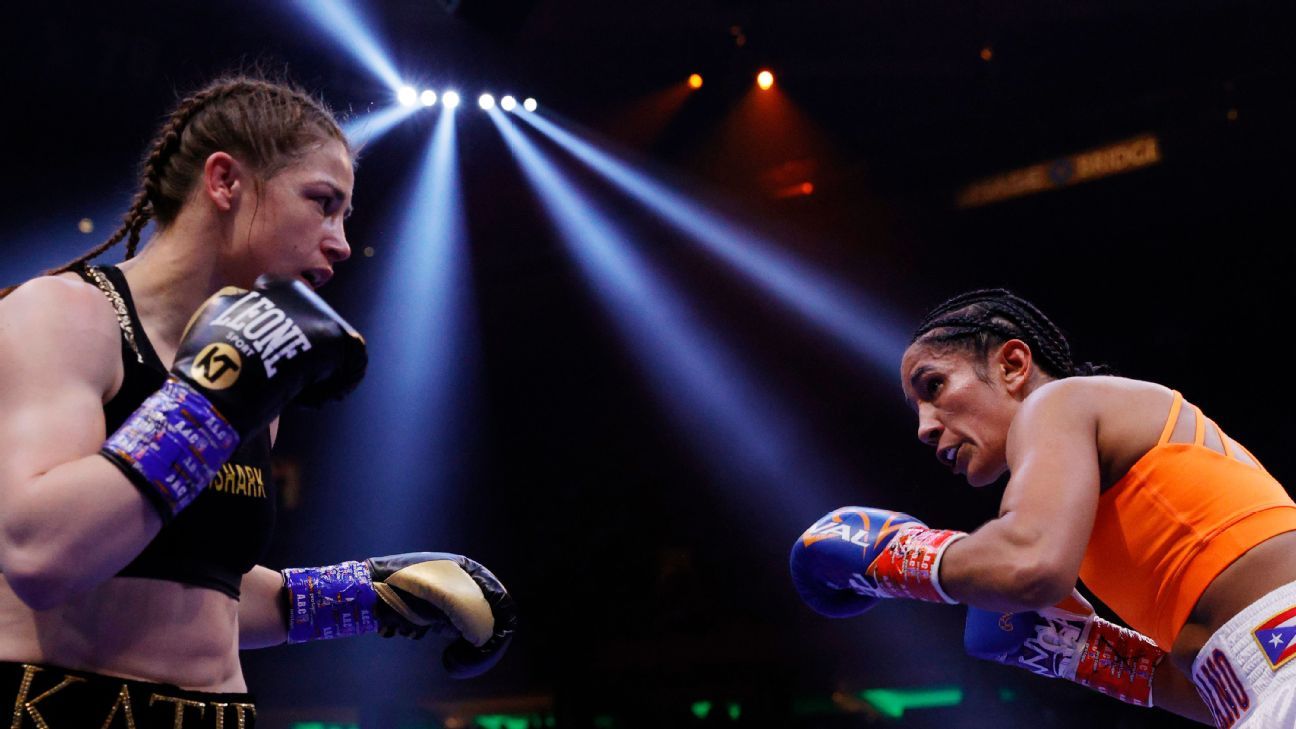 Katie Taylor paused and looked around before stepping into the ring. On the last day in April, a packed crowd at Madison Square Garden in New York awaited her arrival and chanted her name. A fighter from Ireland in the most iconic venue in boxing history, in the city where if you make it there, you’re making it worldwide. All eyes were on her.

Her opponent that night, Amanda Serrano, waited in the ring. The Puerto Rican-born, Brooklyn-raised fighter’s ovation had been similar. Taylor and Serrano are two of the best women fighters in all of boxing and here they were, about to fight each other for the undisputed lightweight championship in the main event.

What came over the next hour was something rarely seen in sports or anything in the world these days: The ascension and elevation of an entire profession in real time. This would be something to build on.

Women’s boxing had a moment in 2022, something that seemed unlikely a half-decade ago and unfathomable a generation ago. The women in the sport pushed to the forefront by putting on fights fans clamored to see. They didn’t just talk, they fought. “A turning point,” Serrano said. “It’s been amazing. Impactful.”

Boxing cards headlined by women this year sold out in New York and in London, with loud, raucous and diverse fans inside the Garden and O2 Arena. The fights were two of the biggest — if not the two biggest — in the history of the sport, Taylor-Serrano in April followed by an all-women card in October topped by Claressa Shields vs. Savannah Marshall in England.

Both were highly anticipated fights with the pomp akin to any men’s superfight. And both bouts delivered with greater circumstance than anyone may realize.

Those two nights, along with many other fights throughout the year, including the Chantelle Cameron-Jessica McCaskill undisputed junior welterweight title bout and Natasha Jonas’ three-fight, three-title run through junior middleweight in 2022, helped draw eyes for the sport. And more eyes can create more growth.

“It’s been such a big difference between four years ago versus now,” Shields said. “We just sold out a venue of 20,000 people when people are saying ‘women’s boxing don’t got fans.’ Then here we go, selling out an arena of 20,000. They say, ‘Women’s boxing don’t got viewership.’ Wrong again, here we are over 2 million views in the UK, 6 million globally [for Shields-Marshall].

“This is what women’s boxing is now. This never would have happened four years ago.”

This year was weekend building on weekend — title fight building on title fight — giving the women’s side of the sport a real chance for sustainability. It wasn’t too long ago where, in conversations with Mayer, Shields and Serrano, they hoped by the end of their careers they would have created a base for the next generation of the sport.

They just didn’t know if they’d see it during their own careers. Now, they have. All three, along with Taylor and Seniesa Estrada, have all signed seven-figure contracts for either one fight or a series of fights over the last 18 months.

Beginning with Matchroom signing Taylor in 2016 and Shields turning pro after two gold medals for the United States in successive Olympics, women’s boxing began its surge. Taylor and Shields started this, taking a sport without any attention since the days of Christy Martin and Laila Ali 20 years earlier and began to create buzz.

Taylor and Shields wanted it all. That they came at the same time — in divisions far enough apart they could build separately on different continents — gave women in boxing multiple stars to look to.

“We just want to fight, and we want to fight the best,” Jonas said. “Ever since Claressa and Katie, having one world title isn’t enough, so everyone wants to get them all.”

They made fighting for titles as often as possible fashionable and realistic, and now, it’s almost an expectation. It created a blueprint for success, one that clearly worked — one Serrano (a seven-division champion) had done mostly in anonymity until the past few years.

Now, almost every top promoter has at least two women fighters on their roster. Matchroom Boxing has a women’s fight on nearly every card and co-promoted Taylor-Serrano with Jake Paul’s MVP Promotions, who promote Serrano. Top Rank signed two of ESPN’s pound-for-pound top 10 — Mayer and Estrada. Golden Boy Promotions, when you click on their fighters page, the first thing you see are their world champions: Three women — WBC and WBA flyweight champion Marlen Esparza, IBF flyweight champion Arely Mucino and IBF and WBO strawweight and junior flyweight champion Yokasta Valle. BOXXER put on Shields-Marshall, promotes Jonas and has plenty of prospects, including lightweight Caroline Dubois, a potential star. DiBella Entertainment, one of the first promoters to sign and push female fighters, continues to promote women in the sport.

And the key to it: Women are willing to fight each other. They realize the biggest fight they can make … and then make it. Simply. And it’s made a huge difference.

“You go around before with just a couple of names. Now people know a lot of these women and you just have to continue to put these fights on.”

That, in many ways, is the next step. Women in boxing have the attention now. They’ve proven they can draw and entertain, especially in the biggest moments. They’ve shown there are growing fanbases. And the fights continue to increase in quality.

The next step, Jonas and Shields said, comes to more equality in pay, in prefight promotion and placement on cards. It’s starting to happen. The past 12 months have proved it. The next 12 could solidify it.

“We, as athletes, always knew how good it was at its highest level,” Jonas said. “We just needed the world to see it, the fans to see it, the platform to be on, the support financially in order to be committed.”