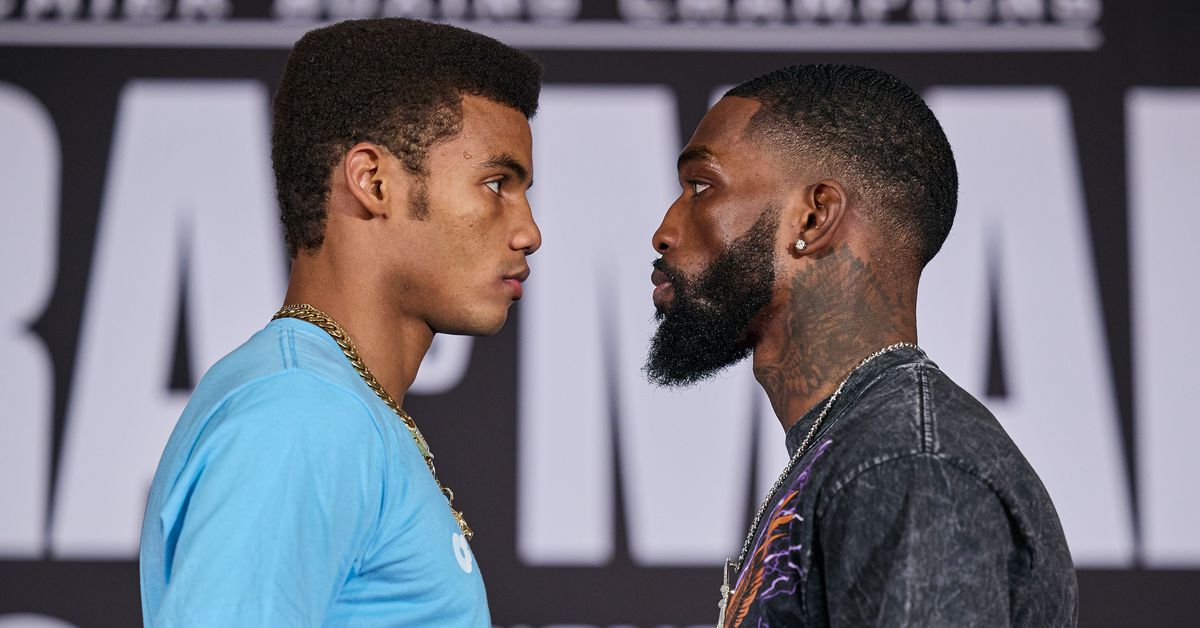 Showtime’s final event of 2022 is also the final major U.S. boxing broadcast of the year, with Michel Rivera and Frank Martin meeting in a battle of unbeaten lightweights on Saturday night.

Who wins the fight?

Love this matchup, love the risk both are taking, love that they’re not farting around with more “tune-ups” and baby steps and are going at what is, on paper, a real challenge for both.

I think it’ll turn out that way, too. I see this one being real competitive, but with a conclusive finish in Martin’s direction when Rivera hangs in the pocket too long, which he has a habit of doing. He hasn’t faced the level of opposition yet to make him truly pay for it, and I think Martin has the skills and tools in close quarters to do it. Martin TKO-10

This is a really good matchup, and one that I fully expect to play out in a technical fashion rather than a slugfest. I think Michel Rivera is a really solid fighter with good mechanics and a solid workrate and superior experience, but what really stands out to me most about him is that he strongly leans on his left hand lead for offense. Now I’m not exactly knocking the man for having a good jab and hook, but in this particular matchup against the southpaw Martin, I think the angles are going to prohibit him from being as active and effective with his lead left as he’d like to be.

So when taking that into account and looking deeper into the matchup between the two fighters, I think this one is going to come down to who lead with their backhand more effectively, and I believe Frank Martin has the edge in that case. Martin certainly won’t have an easy time of it because Rivera is pretty good at range, but I think Martin’s movement will provide him opportunities to stick a lead left hand in on Rivera, and ultimately outpoint him in a pretty damn close fight. I’m going with Martin by decision. Martin MD-12

I’m not feeling great, so I’ll keep it short and leave the Muhammad Ali cosplay jokes to the rest of the gang.

Tough fight to predict. Martin has shown more power, which is usually the swing factor in a pick-’em fight for me. But, Rivera has done more work against better opposition. Rivera has the height and reach to work his style, and he’s stood up against fighters with power profiles similar to Martin in his recent fights.

Martin doesn’t have the same experience with opponents as slick as Rivera. That’s the motivation behind this pick for me. We’ve seen Rivera beat Martin-esque guys before, but we haven’t really seen Martin faced with a Rivera-ious challenge.

The Ali stuff is weird, but I’m rolling with Michel anyway. Rivera UD-12

I have two hopes for the fight:

These are two extremely adept lightweights, the kind that could reignite the division after the Faux Kings dithered away all of its momentum. Technically savvy, physically gifted, and capable of some impressive feats of vindictiveness.

As for the winner, I’ve got Martin by a hair, and it largely comes down to distance. Rivera’s got a not-insignificant three-inch reach advantage and the know-how to use it, but he’s seemingly at his most comfortable sitting in the pocket and tearing away with hooks and uppercuts. Sharp as those are, Martin’s got just a bit more power and speed in close, and his movement looks slick enough to force these sorts of exchanges if Rivera does elect to play a long-range game

To Rivera’s credit, I do think he’s got the stronger body of work, but he’s ostensibly too willing to give Martin the fact he wants. Martin edges out a competitive battle with the aid of a clutch knockdown. Martin UD-12