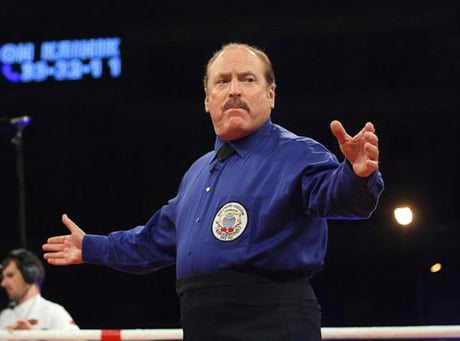 One of the most popular long time referees in all of boxing has reportedly died. Steven Smoger, an affable, fair minded, and ubiquitous presence in boxing rings for decades, was 72 years of age when he reportedly passed on from an undisclosed illness. Notables in the boxing world subsequently took to social media to post their respects and condolences.

“Steve was a real ‘fighter’s referee.’” former junior middleweight titlist and broadcaster Sergio Maura tweeted. “He gave boxers every chance possible to get back into fights they were losing. Smart. Tough. Respected.”

“Rest in peace, Steve Smoger,” posted promoter Lou DiBella, “an exemplary #boxing referee and just a terrific guy. He loved our sport and the people in it and it was reflected in the way he lived and worked. Live every day, friends; it’s a short ride. Heartfelt condolences to the Smoger family.”

“So sad to hear of Steve Smoger’s death,” stated famed broadcaster Al Bernstein. “Terrific person and IMO the best ref in boxing during his time.”

“Crushed by the loss of Steve Smoger,” claimed writer and broadcaster Chris Mannix. “One of the genuine good guys in boxing, in addition to being one of its best referees. Transitioned — successfully — to a referee/judge analyst in recent years and was tremendous at it. RIP, Steve.”

“The boxing community around the world is saddened by the passing of legendary referee Steve Smoger,” wrote the World Boxing Organization. “The WBO family sends its condolences to his friends and family. May he Rest In Peace.”

In a business where being nice is sadly more of a detriment than it is an asset, Smoger managed to be nice and successful simultaneously – no easy feat. Beginning in 1984, Smoger went on to referee over a thousand professional fights in a career that lasted until 2018. In 2015, the Atlantic City native was inducted into the International Boxing Hall of Fame.

“I’ve told my friend it’s like winning an Oscar, an Emmy, and the Nobel Peace Prize,” he said in an interview with Boxwelt. “My friend said ‘peace prize?’ And I said ‘yes,’ it is my job to keep peace in the ring…I’m honored and I’m humbled.”

When asked about his reputations for allowing fights to continue when others in his position might have stopped them, Smoger expressed confidence in his decision making progress.

“I want the fighters to decide their fights,” he answered. “Give them every opportunity to determine the outcome. And that’s been my philosophy and apparently it’s held me in good stead.”